Trump Wants Asylum Seekers To Stay In Guatemala, But People Want Out 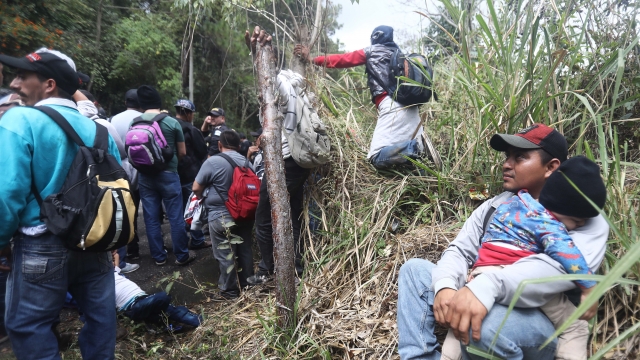 The president says people fleeing other Central American countries must seek asylum in Guatemala - as a study says Guatemalans want to migrate to U.S.

President Trump says migrants fleeing other Central American nations must seek asylum in Guatemala rather than attempt to cross into Mexico on their journey to the United States.

The president asserted on Twitter Monday night that Guatemala was preparing to sign a so-called Safe Third-Country Agreement. The deal would detain people leaving Honduras, El Salvador and other countries and allow them to seek asylum in Guatemala.

But Guatemala hasn't confirmed any such agreement. And even if President Trump is correct, a new study by Vanderbilt University's Latin American Public Opinion Project says one-in-four Guatemalans want to leave the country themselves - and, overwhelmingly, they hope to make it to the United States.

That's because Guatemala is beset with challenges similar to those of Honduras or El Salvador: gang violence, corruption, poverty and limited economic opportunity. That raises questions as to whether migrants from elsewhere will want to stay there, asylum offers or not.

The Vanderbilt survey reveals that more than 45 percent of Guatemalan citizens say public safety is the gravest problem facing the country. That's actually down from 53 percent in 2017. Yet increasing numbers - more than half the population - don't feel secure in their own neighborhoods. A similar percentage of people worry over economic insecurity.

President Trump's acting Homeland Security secretary, Kevin McAleenan, says Honduras and Guatemala have each lost one percent of their population in the last seven months alone from people leaving in hopes of reaching the U.S.

He said Tuesday: “One department of Guatemala, Huehuetenango, has seen almost 35,000 of its residents — close to 3 percent of the population — migrate to the U.S. in that time frame.”

Recently, the U.S. signed an agreement to send up to 80 Homeland Security agents to Guatemala to try to reduce migration by disrupting human trafficking rings.

Yet the State Department is cutting off hundreds of millions of dollars in aid to Guatemala, Honduras and El Salvador that has supported programs for crime prevention, agriculture and other economic development.

In March, President Trump said, "We're not paying them any more because they haven't done a thing for us" in curbing migration. Critics say cutting aid will exacerbate the outflow of humanity.