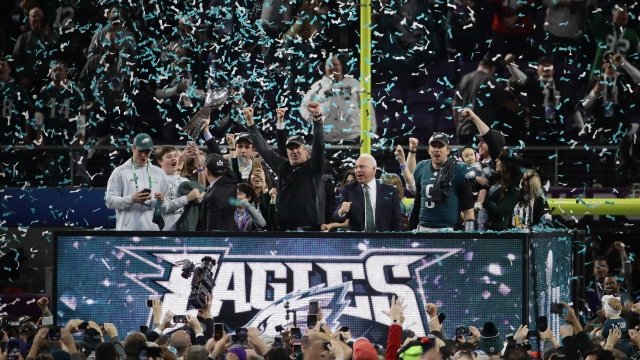 President Donald Trump said the Philadelphia Eagles are no longer coming to the White House on Tuesday.

The White House says the planned ceremony with the Super Bowl champion Philadelphia Eagles is off. President Donald Trump blamed the cancellation on disagreement over kneeling during the national anthem.

The president released a statement Monday evening that said the Eagles "disagree with their President because he insists that they proudly stand for the National Anthem, hand on heart, in honor of the great men and women of our military and the people of our country."

The president's initial statement suggested he uninvited the Eagles for Tuesday's event, but said he would be there with fans, the Marine band and the Army chorus "to celebrate America." But the president later tweeted that the event was canceled.

Last month, the NFL announced a new policy that would require players to stand during the national anthem if they were on the field, but it left them the option to stay in the locker room. Eagles players were critical of the policy, and the team's chairman and CEO released a statement that seemed to back players who chose to kneel.

The winners of the Super Bowl typically visit the White House. Last year, the New England Patriots visited without a number of their teammates, some of whom cited Trump's politics as their reason for skipping the event.

Some Eagles players had already said they wouldn't attend the event Tuesday for similar reasons.