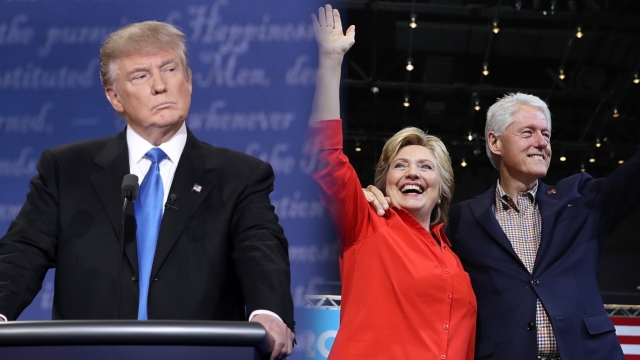 Trump was caught on tape talking about groping women; now he may deflect attention back to Bill Clinton's "indiscretions."

Donald Trump might use Hillary Clinton's husband's past to attack her in Sunday night's debate — even if he said he wouldn't.

Bill Clinton has faced several sexual assault and harassment accusations dating all the way back to the '70s.

One of his most outspoken accusers is Juanita Broaddrick. She says the former president sexually assaulted her in 1978 when he was Arkansas' attorney general.

And in a recent interview with Breitbart, Broaddrick accused Hillary Clinton of intimidating her over the alleged assault.

"She grabbed a hold of my arm, and my hand, and she pulls me into her ... and in a low voice says, 'Do you understand everything you do,'" Broaddrick told Breitbart reporter Aaron Klein.

Trump's touched on what he's called Bill Clinton's "indiscretions" before but said he didn't attack Hillary Clinton over it at the first debate for one reason:

"I have a lot of respect for Chelsea Clinton, and I just didn't want to say what I was going to say," Trump told CNN after the first debate.

On Wednesday, Trump also told Page Six he had no intention of bringing up Bill Clinton in the upcoming debate.

But that might change following Friday's video release from The Washington Post, in which Trump jokes about groping women. Trump released an apology for the incident before immediately going on the attack.

SEE MORE: Republicans Have Taken A Step Back From Trump After That Video Leak

"Bill Clinton has actually abused women, and Hillary has bullied, attacked, shamed and intimidated his victims. We will discuss this more in the coming days. See you at the debate on Sunday," Trump said in a recorded statement on Twitter.

Trump has also been retweeting Broaddrick's accusations against both Clintons in the aftermath of the video leak.

Trump going after Bill Clinton in Sunday's debate is something that Hillary Clinton's camp is reportedly preparing for.