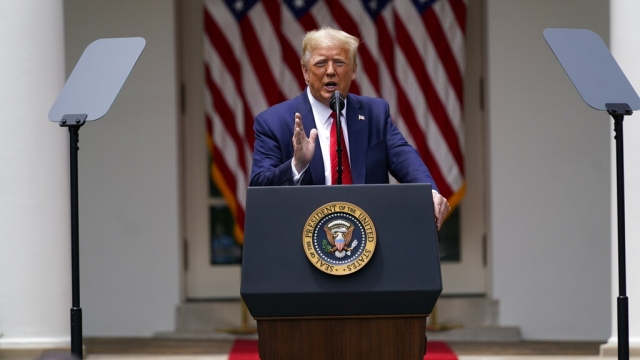 New policing policy touted by the White House includes a database to track officer misconduct but no ban on chokeholds.

President Donald Trump responded to the national outcry for changes to U.S. policing by signing an executive order Tuesday. However, it does not ban chokeholds outright, a central demand of the protest movement.

"Law and order must be further restored nationwide and your federal government is ready, willing and able to help,"  President Trump said during remarks at the White House Rose Garden before signing the order.

The order has three key components. It would create a national database to track officer misconduct; establish a national certification and credentialing system for police agencies; and encourage police to work with social workers when responding to incidents of homelessness, drug addiction or mental health issues.

It's unclear when or exactly how the order will be implemented, but White House adviser Ja'Ron Smith told Newsy he expects it to happen very quickly.

"We have the infrastructure in place to get moving pretty fast on this executive order," Smith told Newsy.

Law enforcement officials at the White House told Newsy they had made several recommendations to the president to improve training on use of force, including requiring officers to render medical aid when they arrive on the scene and changing chokehold techniques.

"The caveat to that is deadly force being required or needed. That's a very unfortunate circumstance, but it's a reality," said Livingston County, Illinois Sheriff Tony Childress.

The order is supported by the national Fraternal Order of Police but does not satisfy protesters because it does not directly address systemic racism in policing.

Senate Minority Leader Chuck Schumer called the order "modest," saying in a statement: “Unfortunately, this executive order will not deliver the comprehensive meaningful change and accountability in our nation’s police departments that Americans are demanding."

The White House says this order is just the first step, and it's relying on Congress to pass further reforms like use-of-force training standards.

"I only call it the first step because once you actually have the executive order you have to do the work to actually enact and get more departments on the local level to maybe look at accreditation and upping their standards. Once we have that happen, it would be a major step in the right direction," Smith said.

"I think we're going to have legislation where something becomes law that actually makes a difference," Scott said in an interview with Fox News.

"The pressure is on us and I really feel we're going to act, and the conversations with my Republican colleagues, even in our first hearing, have been very positive," California Democratic Rep. Karen Bass told Fox News.

Civil rights activists have called for police departments to be defunded and rebuilt from the ground up, but law enforcement officials we spoke with at the White House today said police need more resources, not less when it comes to dealing with police brutality.

"We need to make sure funding is given to deficiencies or gaps where police can do better with the appropriate funding," Florida Attorney General Ashley Moody told Newsy.

"I would simply say as have always said, nobody is going to defund the police. We can restructure the police forces. Restructure, reimagine policing. That is what we are going to do," South Carolina Democrat Rep. James Clybrun told CNN.