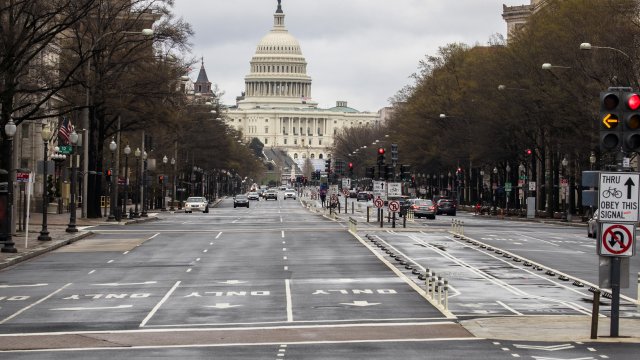 Congress sent a bill estimated to cost more than $2 trillion to the president's desk Friday afternoon.

The president just signed another coronavirus relief package. It was passed unanimously by the Senate and, without a single change, by a unanimous voice vote in the House. The third package is aimed at boosting the economy after 3.28 million people filed for unemployment benefits in the last week.

The price tag: $2.2 trillion. The 880-page bill will support Americans directly, as well as businesses big and small. Unemployed Americans could earn up to $600 per week for four months. This includes independent contractors, too. That amount is on top of what you'd get from your state.

Here's how it all breaks down if you're still working:

Cash payments decrease the more you make. If you're single and make $99,000 or more, you get nothing.

Small businesses can apply for zero-interest loans to cover their mortgages, employee salaries, and benefits like paid leave and health insurance. There's $350 billion in the bill for that. But the biggest pool of money goes to big corporations. They're getting $500 billion, mostly in loans. That includes $25 billion for the passenger airline industry alone.

This big business provision was arguably the sticking point for many Democrats, who were concerned the money would be used for stock buybacks or executive salary increases.

The Senate did end up putting some guardrails on the funds.  There will be a five-person panel appointed by Congress as well as an inspector general to oversee the loans. President Trump, Vice President Pence, department heads, members of Congress and their family members won't have access to this money. Any employee at one of these companies who makes more than $425,000 can't be given a raise. And corporations that want to buy back stock must first repay the loan and then wait a year.

Hospitals, which are struggling to keep up with influxes of patients, will get around $120 billion. The money will go toward vaccines, testing, protective gear and other immediate needs. The bill also suspends student loan payments through Sept. 30 and sets aside $400 million to help states prepare for alternative ways to vote in the 2020 elections.

Some members of Congress took issue with pieces of the legislation, including the $25 million earmarked for the Kennedy Center, where Republican Sen. Roy Blunt serves on the board. Rep. Alexandria Ocasio-Cortez criticized the lack of payments to those without Social Security numbers but with tax IDs.

Members of Congress are already putting in their requests for the next package, from addressing voting during a pandemic, to education to keeping the water on.

Congress may be home, but its role in handling this crisis is far from over.