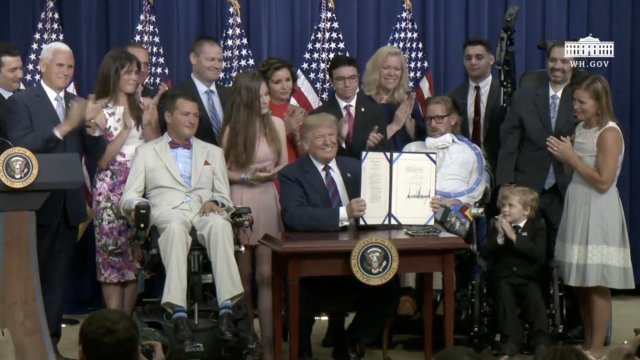 President Trump signed the "Right to Try Act" Wednesday. The bill allows terminally ill patients to use experimental drugs that have not been fully approved by the Food and Drug Administration.

"Thousands of terminally ill Americans will finally have the help, the hope and the fighting chance — and I think it is going to be better than a chance — that they will be cured," President Trump said during the signing ceremony.

To be clear, experimental drugs would still need to clear the FDA's first approval phase, meaning drugmakers must prove their product does not cause harm to humans.

Vice President Mike Pence has been a supporter of the Right to Try Act. He recently met with Jordan McLinn, a second-grader with muscular dystrophy. Jordan has become the unofficial face of Right to Try, pushing for some patients to get access to experimental treatment.

But critics argue this bill wouldn't change much, claiming it offers false hope.