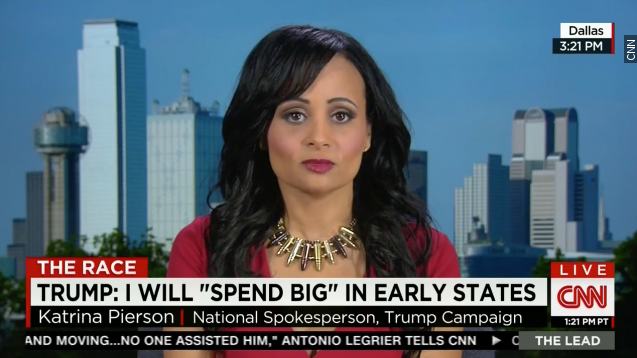 The national spokeswoman for Donald Trump's presidential campaign made news when she wore a necklace made of bullets during an interview.

Donald Trump has grabbed more than a few headlines during this election cycle, and now some of his senior staffers are getting into the news as well.

Trump’s national spokeswoman Katrina Pierson wore a necklace made of actual bullets while appearing on CNN.

In a tweet, Pierson confirmed the ammunition accessory was real and a political statement. She added #2A, making clear her support for the second amendment.

A prominent Tea Party activist, Pierson has previously demonstrated a fondness for her right to bear arms.

But the accessory drew the ire of some gun control activists. Shannon Watts, founder of anti-gun organization Moms Demand Action for Gun Sense in America, jokingly tweeted that Pierson wore the necklace "to bring attention to 90 Americans fatally shot daily."

Pierson responded to the criticism by saying: "The liberals freaking out about my accessories are sexist. They only approve of women in pantsuits and jackets. Oh, and tampon earrings."

In fairness, when MSNBC's Melissa Harris-Perry actually wore tampon earrings in 2013, that stunt also raised quite a few eyebrows.