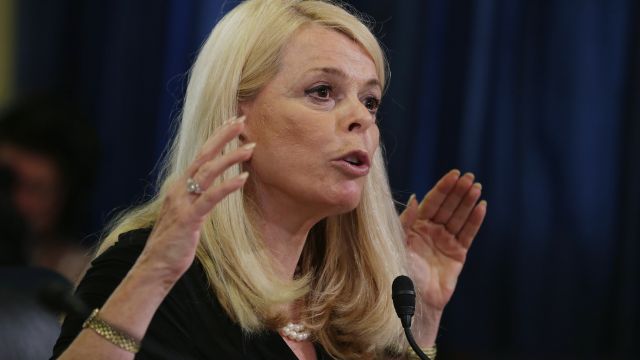 The Republicans who aren't chastising Donald Trump over his leaked tape are making some pretty big stretches to try and put Hillary Clinton in the same boat.

Case in point: "She likes language like this, quote, 'I came to slay, b----, when he F me good I take his ass to Red Lobster,'" former New York Lt. Gov. Betsy McCaughey said on CNN.

"Did she say that?" Don Lemon asked.

"I want to be as good a president as Beyoncé is a performer," Clinton said at a campaign event.

But according to McCaughey, Clinton's fondness for Queen Bey is tantamount to this: "And when you're a star, they let you do it. You can do anything," Trump said in the leaked video.

"Whatever you want," said another man, Billy Bush.

Here's the difference: Beyoncé is talking about rewarding consensual sex with endless shrimp and Cheddar Bay Biscuits. Trump was talking about sexually assaulting women — though he hasn't acknowledged that.

"You bragged that you have sexually assaulted women. Do you understand that?" Anderson Cooper asked at the second presidential debate. "No, I didn't say that at all. I don't think you understood what was — this was locker room talk," Trump replied.