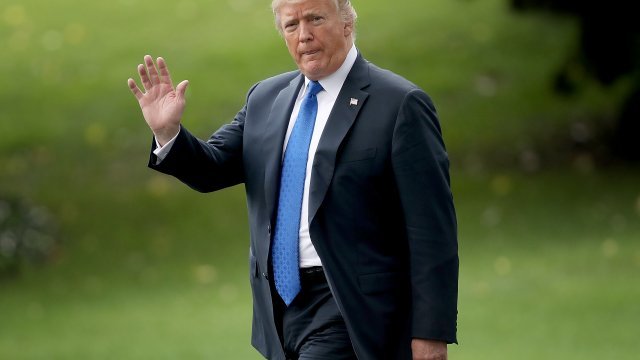 The report suggests the president received more financial support from his father than he previously claimed.

Central to President Trump's image has been his status as a self-made man.

"It's not been easy for me," Trump said at a town hall during the presidential campaign. "I started off in Brooklyn. My father gave me a small loan of a million dollars."

But a 2018 report from the New York Times puts his humble financial beginnings into question. The Times writes that the president inherited $413 million from his father, Fred Trump. The report also claims he and his siblings helped their parents dodge taxes.

The investigation cuts at the perception Trump has been working to build well before he ran for president. Trump had an interest in fame and attention dating back to 1960. It was then, according to unauthorized biographer Michael D'Antonio, Trump began with the production of a Broadway play. By the 1970s, he was featured in a television show as an up-and-coming developer.

That all helped lead to his 1987 book "The Art of the Deal," which he marketed as an every-man's guide to being successful in business. In it, he wrote his father's story is "classic Horatio Alger," referring to the author who wrote several rags-to-riches novels. In an interview with Playboy in 1990, he said "The working man likes me because he knows I worked hard and didn't inherit what I've built." He expressed the same sentiment again during an interview with PBS two years later.

"I built what I build myself," Trump said. "I did it by working long hours, working hard, and working smart."

By the 1980s, Trump Tower was constructed in New York City, to be followed by hotels, golf courses, and casinos emblazoned with the Trump name elsewhere across the country. Then came another important driving force behind his status as a self-made millionaire: The Apprentice. It all helped him launch a White House bid in which the Manhattan-dwellling millionaire was able to connect with large swaths of voters with backgrounds drastically different than his. A large part of that appeal centered on Trump's claims that he could do for the country what he did for his own businesses.

All the while Trump refused to publicly release the one thing that would give voters a fuller view of his finances.

After seeing the report, Trump hit back on Twitter calling it a "hit piece" and saying the newspaper "never recovered" from incorrectly calling the 2016 election for Hillary Clinton.