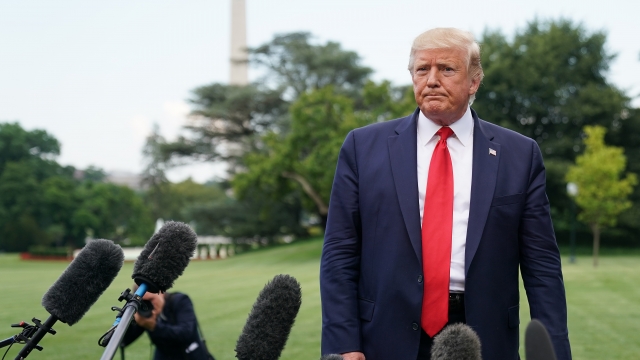 A Guatemalan court blocked the country's leader from signing the deal.

President Donald Trump threatened to punish Guatemala after its leader was blocked from signing a so-called Safe Third-Country Agreement with the U.S.

On Tuesday, President Trump tweeted that he was now considering imposing tariffs and remittance fees against Guatemala.

Guatemalan President Jimmy Morales was originally scheduled to visit Washington, D.C. last week to discuss the deal. But he postponed that trip the same day Guatemala's Constitutional Court issued an injunction blocking him from signing the agreement.

Under such an agreement, Central American migrants journeying through Guatemala en route to the U.S. would be forced to apply for asylum in Guatemala instead.

But while President Trump's asserted that Morales was prepared to sign the deal, the Guatemalan government's said that it's never "contemplated signing an agreement to convert Guatemala into a safe third country."

It's not surprising that such an agreement is unpopular in Guatemala. A recent survey by Vanderbilt University's Latin American Public Opinion Project says 1 in 4 Guatemalans want to leave the country themselves. Most hope to make it to the U.S.

That's because Guatemala is beset with challenges similar to those of Honduras or El Salvador: gang violence, corruption, poverty and limited economic opportunity. That raises questions as to whether migrants from elsewhere will want to stay there, asylum offers or not.