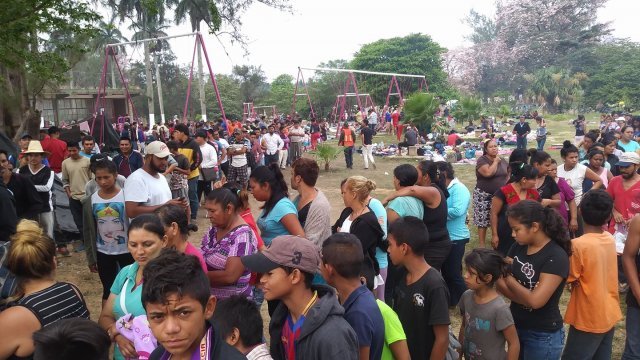 President Trump tweeted that a "caravan" of Central American migrants heading to the U.S.-Mexico border "better be stopped before it gets there."

President Trump is now threatening to cut foreign aid to Honduras and other countries unless a large group of Central American migrants are blocked from entering the U.S.

The president has been tweeting about a so-called caravan of more than 1,000 migrants, many of whom plan to cross the U.S.-Mexico border and seek asylum. Trump says the caravan "better be stopped before it gets there." He threatened foreign aid spending and U.S. participation in the North American Free Trade Agreement, or NAFTA, if it wasn't.

A lot of the migrants in the caravan are originally from Honduras; many of them told BuzzFeed they were fleeing poverty, violence and unrest after the contested election of Honduras' new president last year.

Honduras is slated to receive about $67 million in economic aid from the U.S. this year — that's a substantial drop from the $90 million the country received in 2017.

The White House can't cut that foreign aid further without the help of Congress, but it can reroute existing funding unless Congress has specified otherwise.

To get a satisfactory annual review, judges will now need to clear at least 700 cases a year.

As for NAFTA, renegotiations on the sweeping trade deal wrapped up their seventh round in March. Trump has alternately threatened to leave the talks unless his policy demands are met and used policy levers like tariffs to press for a better deal in the negotiations.

Mexican immigration officials have moved to break up the caravan by registering and processing immigration claims within Mexico. But the country probably won't be able to ban migrants from entering the U.S. without risking a violation of international law.