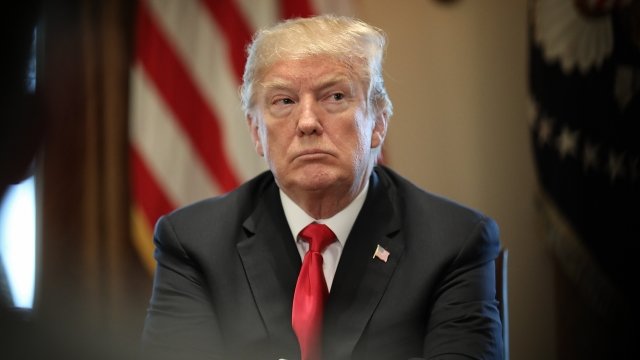 President Donald Trump threatened both Syria and Russia with missiles in an early Wednesday morning tweet.

He said, in part: "Get ready Russia, because they will be coming, nice and new and 'smart!'"

Russia vows to shoot down any and all missiles fired at Syria. Get ready Russia, because they will be coming, nice and new and “smart!” You shouldn’t be partners with a Gas Killing Animal who kills his people and enjoys it!

The tweet came just hours after the Russian ambassador to Lebanon reportedly said Russia would shoot down any U.S. missiles aimed at Syria.

Less than an hour after the first tweet, Trump tweeted there is no reason for a poor relationship with Russia. His message said, in part, "Russia needs us to help with their economy, something that would be very easy to do, and we need all nations to work together. Stop the arms race?"

Our relationship with Russia is worse now than it has ever been, and that includes the Cold War. There is no reason for this. Russia needs us to help with their economy, something that would be very easy to do, and we need all nations to work together. Stop the arms race?

Here's some context: Over the weekend, dozens of people died after a suspected chemical attack on the last rebel-held part of Syria's eastern Ghouta region. The Syrian government said it wasn't involved.

On Tuesday, the Organization for the Prohibition of Chemical Weapons announced it would help investigate the incident.

Several world leaders have denounced the attack and blamed the Syrian government.

The Trump administration hasn't officially announced what a U.S. response to a suspected chemical attack in Syria would look like.