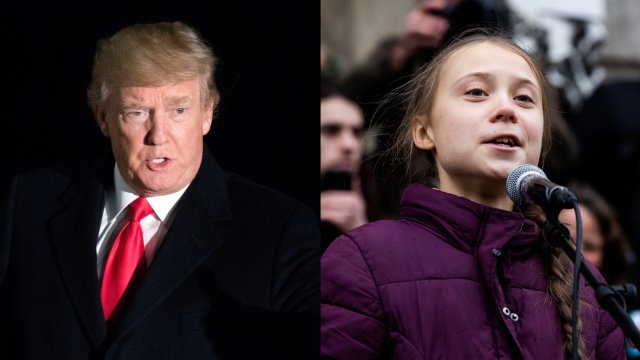 As Australia experiences ongoing extreme weather, political leaders, business leaders and activists from all over the world addressed climate change at the World Economic Forum in Davos, Switzerland.

"Any plan or policy of yours that doesn't include radical emission cuts at the source, starting today, is completely insufficient for meeting the 1.5 or well below 2 degree commitments of the Paris agreements," said Thunberg.

"You say children shouldn't worry. You say: 'Just leave this to us. We will fix this. We promise we won't let you down. Don't be so pessimistic.' And then — nothing. Silence. Or something worse than silence: empty words and promises which give the impression that sufficient action is being taken."

President Donald Trump, who spoke just an hour before Thunberg, touched on the same topic. He announced his support of the Trillion Trees initiative before taking what appeared to be a dig at the young activist, though he didn't specifically mention her by name.

President Trump: "This is not a time for pessimism. This is a time for optimism. Fear and doubt is not a good thought process because this is a time for tremendous hope and joy and optimism and action. But to embrace the possibilities of tomorrow, we must reject the perennial prophets of doom and their predictions of the apocalypse."

President Trump has more directly addressed Thunberg in the past. In December, after Thunberg was named Time magazine's Person of the Year, the president mocked her on Twitter for having what he called an "anger management problem."