Trump To Meet With South Korean Counterpart At The White House 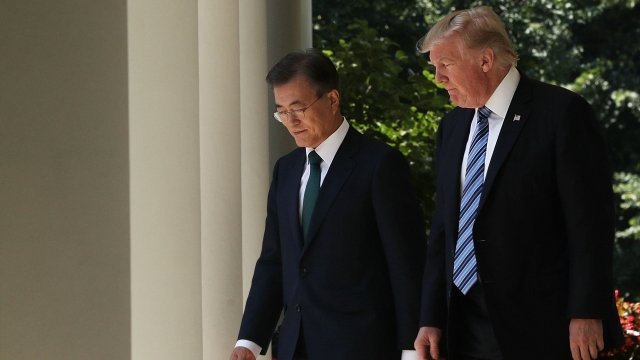 South Korea's president will reportedly use Tuesday's talk to reassure Trump that a diplomatic deal can be reached with North Korea.

President Donald Trump is scheduled to meet with his South Korean counterpart Tuesday.

These talks in Washington, D.C., come ahead of a scheduled summit between Trump and North Korea's leader Kim Jong-un next month in Singapore. But North Korea recently hinted it could cancel the summit if it continued to face pressure to denuclearize.

Politico reports South Korean President Moon Jae-in is expected to use Tuesday's meeting to reassure Trump that a diplomatic deal can be reached with North Korea.

The two leaders reportedly already began talking about the sudden shift in North Korea's position during a phone call this past weekend.

One test of whether things are still on track with North Korea will come later this week. The country's previously said it will dismantle its nuclear test site sometime between May 23 and 25. Pyongyang's allowed a group of foreign journalists into the country to cover the event, but no technical experts were invited.