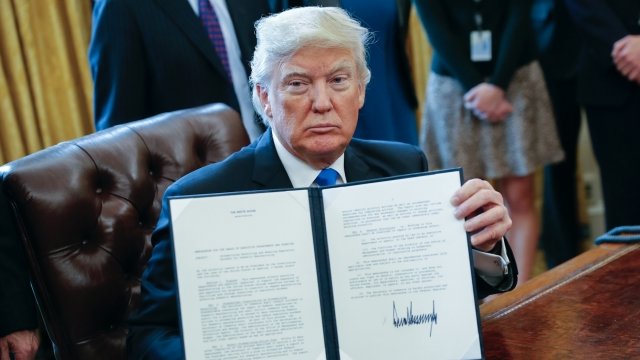 President Donald Trump will sign a bill that sanctions North Korea, Russia and Iran and nixes his power to end those penalties.

The White House announced President Donald Trump will sign legislation that sanctions Russia, Iran and North Korea — and restricts his power to change that.

There was some uncertainty about whether Trump would sign the bill, mostly because it included a provision that prevents him from nixing those penalties.

But even if Trump had vetoed the bill, it would have been purely symbolic. Both the House and Senate easily had the votes to override it.

Foreign Agents In The Spotlight In Trump-Russia Investigation

Senators from both parties are voicing concerns that foreign agents aren't being properly monitored in the U.S.

In retaliation for the bill, Russia said it would boot American diplomats from the country and seize recreation areas those diplomats used.