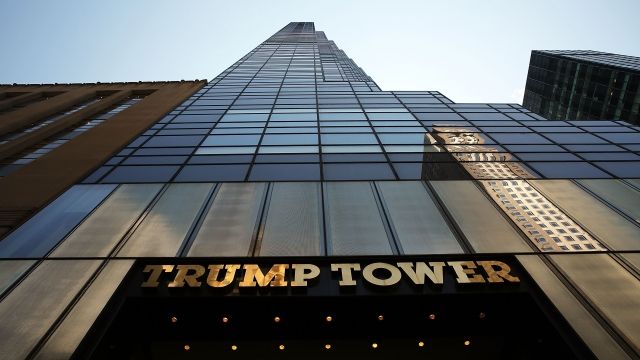 It apparently has to do with costs New York City has incurred securing the area around Trump Tower.

The evacuation of the Trump Tower lobby Tuesday ended up sparking a tiff between President-elect Donald Trump's team and that of New York City Mayor Bill de Blasio.

The tower, which is where the Trump transition team's offices and the Trump family home are located, was briefly evacuated after a backpack was left unattended. It ended up having toys in it.

Trump's incoming press secretary Sean Spicer tweeted his thanks to the New York City Police Department after the incident.

De Blasio said his face time with Trump was respectful, substantive and candid.

The Trump team was apparently none too pleased with Phillips. Trump's social media director Dan Scavino Jr. then jumped in, calling Phillips "an embarrassment" to de Blasio and the NYPD.

De Blasio's office sent a letter to Congress earlier this month asking for up to $35 million in reimbursements for providing security around Trump Tower.

Instead, Congress allocated $7 million in reimbursements for security costs from the day after the election to Inauguration Day.

Phillips referenced that and asked for the Trump team's help in securing a greater reimbursement when he replied to Scavino.

Jason Miller helped Donald Trump get to the White House, but he won't be joining him there.

In a statement obtained by Politico, the mayor's office stood by Phillips' tweet saying, in part, "It's our job to aggressively advocate for the NYPD and for City taxpayers, and we won't back down from that responsibility."

On Wednesday, de Blasio's office announced it was re-opening a street near Trump Tower. It had been closed for several weeks in order to secure Trump Tower, the president-elect and his family. Nearby stores had complained the street closure was hurting business.

"The safety of New Yorkers and of the President-Elect are our top concern. The changes we are implementing will maintain that security, while allowing for more movement in the area and addressing concerns raised by surrounding businesses. We will continue to examine and carefully confront the challenges presented by this unprecedented responsibility," de Blasio said in a statement.