The President Claimed Crime In Germany Is 'Way Up' — It's Down 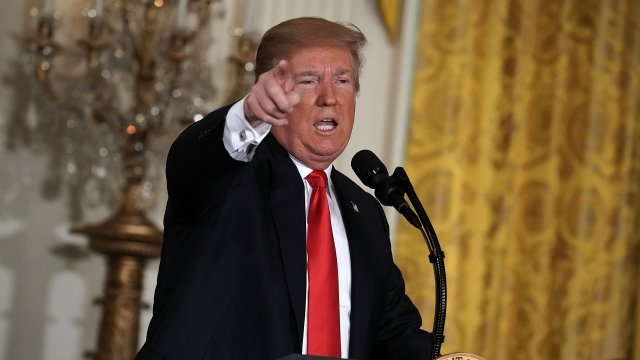 The president tried to tie immigration in Germany to an increased crime rate. Problem is, crime is down in Germany.

President Donald Trump is no stranger to anti-immigrant rhetoric, and this past week he tried to tie an immigration surge in Germany to a rise in crime. And he failed.

The president said: "The people of Germany are turning against their leadership as migration is rocking the already tenuous Berlin coalition. Crime in Germany is way up. Big mistake made all over Europe in allowing millions of people in who have so strongly and violently changed their culture!"

Crime hasn't risen in Germany. It's gone down. Compared to 2016, crime in 2017 was down 9.6 percent. It was down 4 percent compared to 2012. That's all according to the latest government numbers.

"Where did the president get the statement that crime was way up in Germany under the Merkel plan for admitting refugees?" Newsmax reporter John Gizzi asked Sanders.

"I'm not aware of the report that you're referencing, but I'll be happy to check into it and circle back with you," Sanders said.

"It's from the German Ministry of the Interior," Gizzi interrupted.

"I heard that part, but I haven't seen it, but I'll be happy to check into it and circle back," Sanders said, before calling on another reporter.

Whether she gets back to anyone or not, it will remain true that crime in Germany is down, not up.