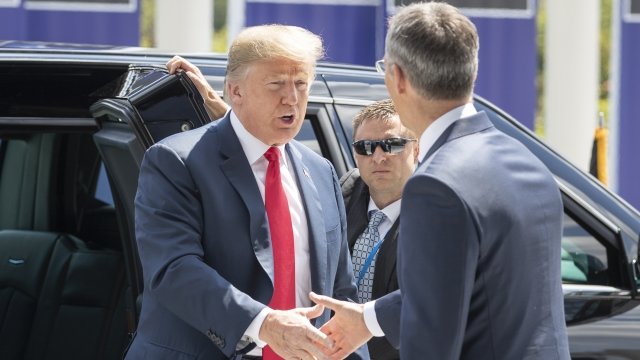 Trump suggested at the NATO summit Wednesday that countries up defense spending goals from 2 percent of their gross domestic product to 4 percent.

President Donald Trump is calling on NATO members to double their spending targets on defense.

According to White House press secretary Sarah Sanders, Trump suggested at the NATO summit Wednesday that countries increase defense spending goals from 2 percent of their gross domestic product to 4 percent.

Sanders said in a statement: "President Trump wants to see our allies share more of the burden and at a very minimum meet their already stated obligations."

It's a high number to spend on defense every year. Even the U.S., which spends more on defense than any other nation in the world, hasn't forked over 4 percent of its GDP for defense since 2013. Only eight NATO nations are expected to meet the 2 percent goal this year.