Why President Trump's Use Of 'America First' Upsets Some People 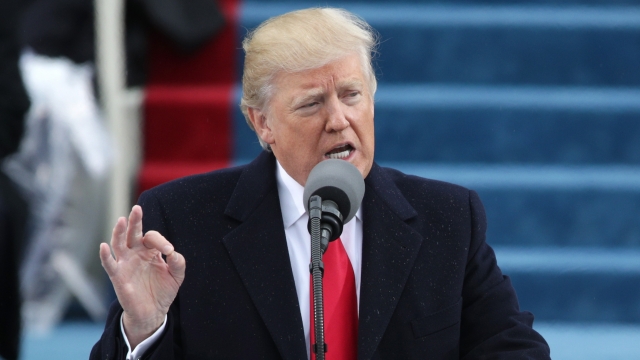 During his inaugural address, President Donald Trump said, "From this day forward, it's going to be only America first, America first."

"America first" — it's a phrase Trump used as a slogan on the campaign trail, on Twitter and now on the White House website.

He's used it to describe how he'll approach trade, foreign affairs and immigration. But it's a phrase that concerns some Americans.

How Do You Even Plan An Inauguration?

Missouri Sen. Roy Blunt, the chairman of the Joint Congressional Committee on Inaugural Ceremonies, sat down with Newsy to explain.

In April, the Anti-Defamation League publicly asked Trump to stop using the slogan.

That's because of the history of the America First Committee, which was formed in 1940 to keep the United States from joining World War II and supporting supporting Britain and the Allies.

Some of its most well-known members and leaders were flat-out anti-Semitic. While some of them were booted from the group for that reason, another leader, Charles Lindbergh, remained.

He had admired the military advances Germany made under the Nazis while living in the country in the late 1930s. When he moved back to the U.S., he gave speeches with anti-Semitic undertones.

He and other group members said Jewish and British people were moving the U.S. in the direction of war.

In a 1941 speech, Lindbergh characterized Jews as "other people" and said "their greatest danger to this country" was their "large ownership and influence" in the media and government.

Lindbergh said he understood why Jewish people wanted to topple the Nazis, but then said: "We cannot blame them for looking out for what they believe to be their own interests, but we also must look out for ours. We cannot allow the natural passions and prejudices of other peoples to lead our country to destruction."

Trump told The New York Times in July: "America First is a brand-new modern term. I never related it to the past."

A rabbi — Rabbi Marvin Hier — offered the benediction during the inauguration ceremony. And Trump's daughter, Ivanka, and son-in-law, Jared Kushner, are Jewish.

"America first" became a worldwide trending phrase on Twitter after the inauguration. Many used it as a hashtag applauding the new president. But his use of the phrase didn't sit well with others on the social platform.