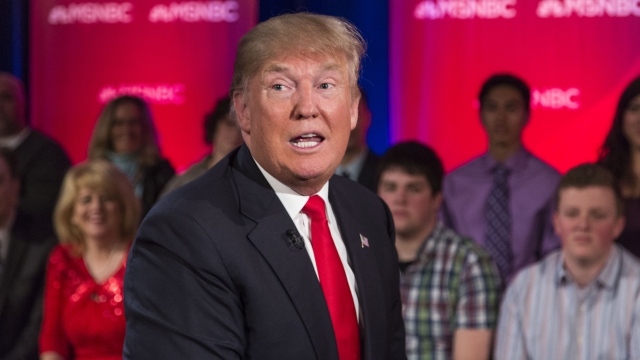 With his latest comments about abortion, Trump has received the ire of both pro-choice and pro-life groups.

"Do you believe in punishment for abortion, yes or no? As a principle," MSNBC's Chris Matthews asked presidential candidate Donald Trump during a candidate town hall.

"The answer is that there has to be some form of punishment," Trump answered.

"For the woman?" asked Matthews

"Yeah. There has to be some form," Trump said.

In an interview that aired Wednesday, Donald Trump called for a ban on abortion. And added if abortion is banned, women who get one should receive punishment. When pressed on what the punishment would be, Trump said he wasn't sure.

"You take positions on everything else," Matthews said.

"Frankly, I do take positions on everything else. It's a very complicated position," Trump said.

After the criticism rolled in, Trump did something he rarely does: backtrack. In a statement, he said if abortion was ever banned, the onus would be on the doctor, adding: "The woman is a victim in this case as is the life in her womb. My position has not changed — like Ronald Reagan, I am pro-life with exceptions."

The GOP presidential front-runner's position has clearly changed over the years. In 1999, he said: "I cringe when I listen to people debating the subject. I still believe in choice." And that evolution is something his much more conservative rival Ted Cruz is quick to point to as proof Trump isn't a "true conservative."

Trump previously broke with conservative orthodoxy and praised Planned Parenthood during a GOP debate. However, Trump also made it clear he would sign any bill defunding the group because performing abortions is a part of its services.

Both Democratic candidates and the president of Planned Parenthood tweeted about the comments. But a less expected critique came from March for Life, a pro-life organization.

In a statement, the group's president said: "Mr. Trump's comment today is completely out of touch with the pro-life movement ... Being pro-life means wanting what is best for the mother and the baby. ... We invite a woman who has gone down this route to consider paths to healing, not punishment."

And Trump's current position is in the minority. A Gallup poll from last year found 80 percent of respondents believed abortion should be legal at least in certain circumstances.

This video includes images from Getty Images and clips from CBS, NBC and The Christian Broadcasting Network.