President Trump Aims To Win Over Latino Voters For 2020 Election 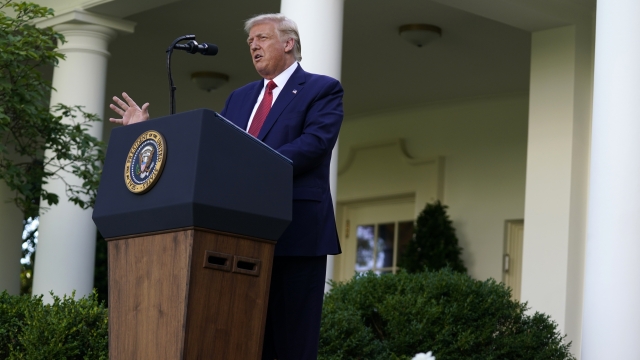 Through several White House initiatives and executive orders, President Trump is actively courting Latino voters ahead of the 2020 election.

President Donald Trump is ramping up efforts to win over Latino voters this November.

In July alone, President Trump announced the Hispanic Prosperity Initiative, held a meeting with the Mexican president on USMCA and promised upcoming action on DACA — something that could offer so-called Dreamers a pathway to citizenship.

Focusing on the key voting bloc is one way experts say the Trump campaign is hoping to get back on track, since polling shows him trailing presumptive Democratic nominee Joe Biden.

Latino Americans have been disproportionately impacted by the coronavirus. But the Trump campaign's messaging has been centered on the economy, school choice and accusing Democrats of moving towards socialism.

"There's a big difference between such another thing, socialism or the government's going to be running things," said Adolfo Franco. "I feel the Democratic Party and Joe Biden is being dragged very much in that direction versus our direction, which is less government and more opportunity."

Adolfo Franco has consulted with President Trump's re-election campaign on a variety of issues including Hispanic outreach. He says the Latinos for Trump Coalition, which launched over a year ago, has made investments as well as national and targeted outreach efforts in key states like Arizona, Florida, Texas, New Mexico and Nevada.

Biden leads President Trump among Latino voters at 59% to 39% in a recent NPR/PBS News Hour/Marist poll. If figures like this hold, that would be a slight improvement for President Trump, who won 28% of the Latino vote in 2016. Biden has so far underperformed among Hispanic voters compared to how Hillary Clinton did four years ago.

Geraldo Cadava says both political parties could benefit by direct outreach to different groups within the Latino community but that it's also important to have a national approach.