TSA's Latest Unusual Security Find Is Quite The Catch 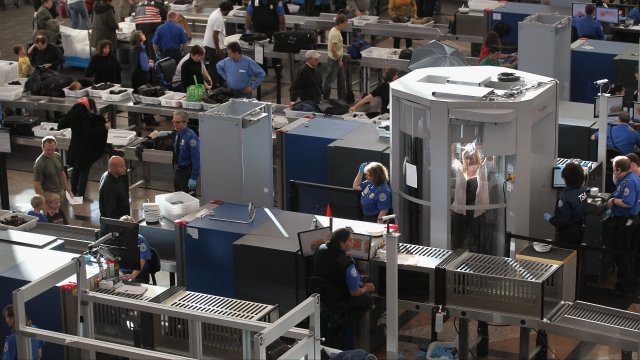 Boston is known for its seafood — which is perhaps why someone wanted to take some with them through the airport.

Specifically, a 20-pound live lobster. According to TSA Spokesman Michael McCarthy, the crustacean was found in a passenger's checked luggage.

"I would be shocked if this isn't the biggest lobster TSA has screened, although I can't say for certain," McCarthy told NPR.

Humorous as this seems, the TSA is perfectly OK with passengers checking live lobsters.

But TSA's website says if someone wants to carry a live lobster through security screening, then it "must be transported in a clear, plastic, spill proof container" so officers can "visually inspect" it.

TSA Might Start Asking Flyers To Remove Books From Carry-ons

A test program requiring passengers to remove books from their carry-on bags during TSA screening will "likely" go nationwide.

Speaking of live animals, the TSA has found passengers trying to sneak all sorts of things through security, including birds, turtles and eels.

Always on the hunt for weapons, agents have discovered a bladed dragon claw, batarangs and even a bullet-covered gold gas mask — all in carry-on luggage.

But nothing is likely more bizarre than the corpse someone wheeled through an airport in Atlanta.

Turns out, it was a prop from the "Texas Chainsaw Massacre" film.