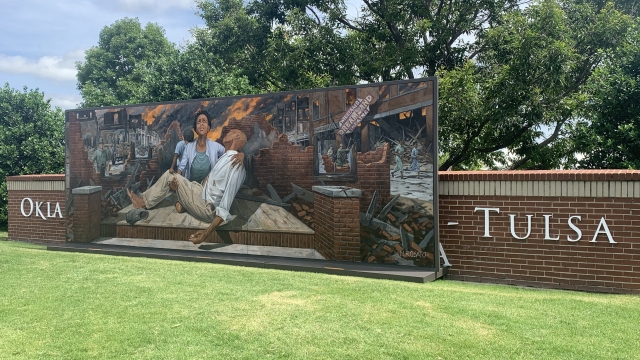 Descendants of the 1921 Black Wall Street Massacre are asking for an independent investigation by the Justice Department.

Descendants of the Black Wall Street Massacre of 1921 are asking for an independent investigation by the Justice Department after they say the City of Tulsa abruptly reburied human remains without completing an investigation.

“It was kind of ridiculous to think that the criminals who killed the people doing the massacre, who buried these folks in unmarked graves and who hid led a conspiracy of silence about these grades for almost 100 years, that they will be the ones in charge of trying to find these graves, and then doing what's right by those that they found," said Damario Solomon Simmons, an attorney for the Tulsa descendants.

In June, the city announced a team of archaeologists had discovered 28 graves at Oaklawn Cemetery, of people who may have been killed in the attack on a black community a century ago. Twenty were exhumed.

“….as this process moved along, and the city had stated from the beginning that this was going to be, this is a murder investigation -- this was a crime scene, this will be a homicide investigation...and those things didn't materialize,“ Simmons said.

In late July the city announced the excavation was complete and 19 bodies it examined would be reburied at Oaklawn cemetery while…”identification of the individuals continues.”

But many descendants say this reburial was completely against their wishes while the investigation was ongoing. It's the latest in longstanding suspicions that Tulsa is not truly interested in finding out what exactly happened in 1921 when white residents attacked the black community.

“....Public opinion says, you found evidence, you abruptly stopped the investigation. So, public opinion says that looks like a cover-up, because when you have a crime scene, you find evidence, and then you close the case?,” said Chief Egunwale Amusan, President of the African Ancestral Society.

As for why not all of the bodies discovered were exhumed, in an email obtained by Newsy, the Tulsa Mayor’s office told an oversight committee that some did not fit the pattern of previously discovered victims of the massacre.

“You're marginalizing the most marginalized people on the planet, black women and children through your investigation, because you have a scope that's extremely narrow. And we have a grave site where you have bodies that are not even turned in the right orientation, right? Disrespectfully placed in a, in a grave site, and you're debating about whether or not they have something to do with the massacre,” Amusan said.

Tulsa officials would not agree to an on-camera interview, but in a statement told Newsy while on-site work and DNA sampling are complete, it could take years for the analysis to be finished and the bodies fully identified. Tulsa officials added that the reburial in Oaklawn cemetery was agreed to before the excavation began and a memorial will be built.

“These are people, people with families, people that love them, they deserve to have a proper burial…they do not deserve to continue to be housed and be in the custody of the same entities that killed them and buried them in that place in the first place. So this is why we believe that the city of Tulsa is not qualified to lead this investigation,” Simmons said.

Simmons says he has received confirmation the Justice Department is reviewing their request for an independent investigation.