Tulsi Gabbard Steps Away From Campaign To Report For Active Duty 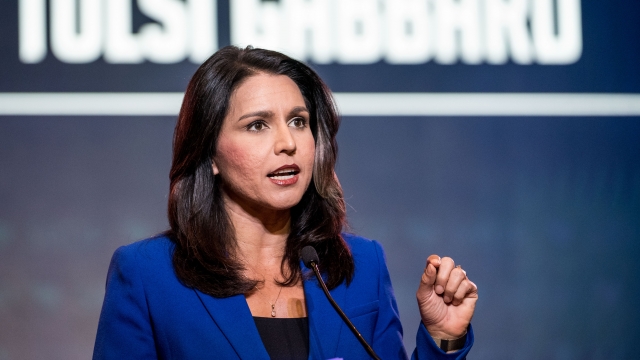 The Democratic presidential candidate will report for two weeks of active duty with the Hawaii Army National Guard.

U.S. Rep. and Democratic presidential candidate Tulsi Gabbard will step away from her campaign for a couple of weeks to report for active military duty.

The congresswoman is a major in the Hawaii Army National Guard. She's completed two tours of duty in the Middle East — in Iraq from 2004 to 2005 and Kuwait from 2008 to 2009. She's one of only three Democratic presidential hopefuls with military experience. The other two are South Bend, Indiana, Mayor Pete Buttigieg and former U.S. Rep. Joe Sestak.

Gabbard said she's not concerned about how her absence will impact her campaign, saying she's looking forward to fulfilling her service and responsibility.

She's stepping away from the campaign trail without securing her spot in round three of the Democratic Primary debates next month. And according to The New York Times, Gabbard is polling at less than 1%.