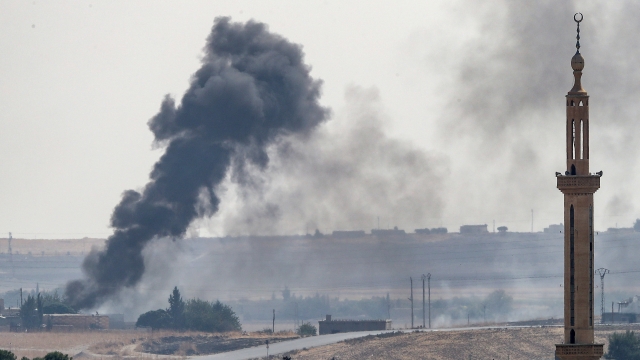 The deal brokered with Turkey by Vice President Mike Pence is getting backlash from lawmakers, who condemn the military offensive as a whole.

U.S. lawmakers are speaking out about Thursday’s announcement that the U.S. and Turkey have agreed to a deal that would pause Turkey’s military actions in northeast Syria.

The deal would allow Turkey to take control of a stretch of land in the region it has long sought after as a “safe-zone” where it can return over 1 million Syrian refugees. For years the region has been under the control of Kurdish forces, whom Turkey has viewed as a terrorist group. However, the Kurdish forces have served as a critical ally to the U.S. in fighting ISIS in the region.

Turkey’s foreign minister was quick to make clear that the agreement is “not a cease-fire.” When asked about this assertion by Turkey, U.S. Special Envoy to Syria James Jeffrey said, “We use the word cease-fire, the Turks do not because it's not in the agreement. What we mean is, and we define this very carefully, a cease-fire is no forward movement of troops on the ground and no military action other than self-defense."

On Thursday, House Speaker Nancy Pelosi and Senate Minority Leader Chuck Schumer responded to Pence's comment that all sanctions imposed on Turkey would be dropped once a permanent cease-fire is in place.

In a statement, they said, “President Trump is flailing. The President’s decision to reverse sanctions against Turkey for brutally attacking our Kurdish partners in exchange for a sham ceasefire seriously undermines the credibility of America’s foreign policy.” They added that it “sends a dangerous message to our allies and adversaries alike that our word cannot be trusted.”

When speaking with reporters about the region and the deal, President Trump said that the Turkish government “had to have it cleaned out.”

Former U.S. ambassador to the United Nations Samantha Power responded to the remark on Twitter saying, “The president of the United States has endorsed ethnic cleansing.”

According to Reuters, the Kurdish-led administration in northeast Syria reported that 218 civilians have been killed since Turkey’s military offensive began a little over a week ago. It's unclear at this time how this deal pausing Turkey’s military actions will be enacted in the region.