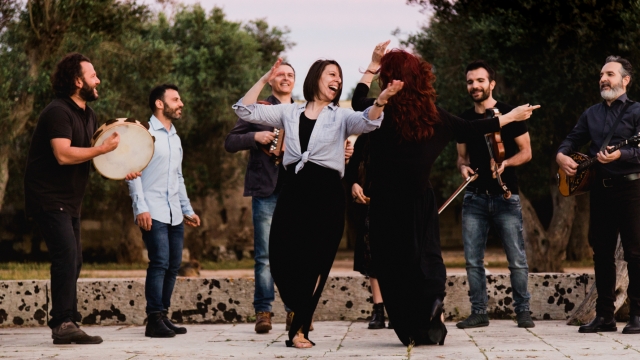 As a dancer, Mickela Mallozzi knows finding the rhythm can be a powerful way to connect with people who don't speak the same language.

From waltzing in Vienna, to dancing with swords in Croatia, to doing the tango in Argentina ... Mickela Mallozzi is making her way around the world, one dance at a time.

"I want to learn every single dance that there is on the planet because it's just so much fun," Mallozzi said.

The Emmy Award-winning host of "Bare Feet" on PBS didn't have any television experience when she came up with the idea for her show in 2010. But as someone who'd been dancing most of her life, Mallozzi knew finding the rhythm could be a powerful way to connect with locals who didn't speak the same language.

Mallozzi, who’s Italian-American, used her own DNA to dictate what countries she'd explore on the newest season of "Bare Feet."

"It was so emotional for me because I knew somewhere in my past, someone from my blood and from my DNA had come from this land," Mallozzi said.

In order to show me what her journey's been like, we got in touch with my German roots at an Oktoberfest. But before we could start dancing, I had to dress the part.

With our dirndls on and the rain slowing down, Mallozzi and I were ready for our dance lesson with members of Ed Wagner's Brass Band and their family. First up: the tick tock polka.

Our teacher Sandy Schuber has been dancing these steps since she was 10 years old. She got the two of us up to speed before the band actually sped things up.

We then switched over to the German polka, which is a classic three-step. After our dance lesson, there was time for one good-luck hug before the band took the stage.

Admittedly, I had no idea what I was cheering for — but I guess that’s Mallozzi's point: I don’t  need to be able to understand German to feel connected to this group of people.

Season three of "Bare Feet with Mickela Mallozzi" is now airing on PBS.