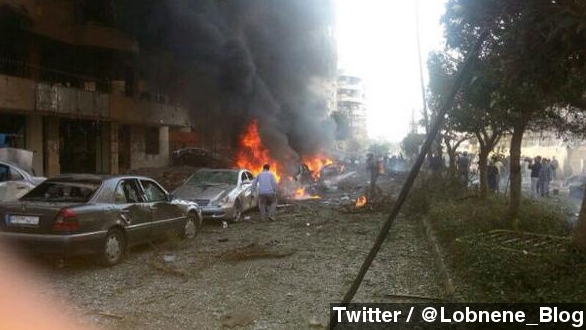 An Al-Qaeda linked group is claiming responsibility for twin explosions at the Iranian embassy in Beirut that left more than 20 dead.

An Al-Qaeda linked group is claiming responsibilty for twin explosions at the Iranian embassy in Beirut that left more than 20 dead and nearly 150 wounded.

A huge column of smoke could be seen rising into the sky and bodies were scattered throughout the streets Tuesday.  (Via RT)

The embassy is located in the predominantly Shiite Muslim district of Janah. The area is home to many Iranian diplomats and their families. (Via Channel 4)

The Abdullah Azzam Brigades, a Lebanese Sunni jihadist group affiliated with al-Qaeda, has claimed responsibility. It says the two suicide bombers were Sunni Lebanese men — and that's significant for a few reasons.

The attack comes amid intense fighting from the Syrian civil war — fighting that’s spilled over into neighboring Lebanon.  (Via BBC)

As The New York Times put it, the attack "seemed to fit a pattern of deepening sectarian division across the region inspired by the civil war in Syria."

The district Janah is considered a stronghold for Lebanese Shi'ite militant group Hezbollah. Iran and Hezbollah are both major backers of Bashar al-Assad’s regime and his government troops.

But Syrian rebel groups — that is, those fighting Bashar al-Assad’s government — have threatened in the past to strike Shi’ite areas in Lebanon in retaliation for Hezbollah’s role next door. CNN's Nick Paton Walsh says this kind of direct targeting of the Iranian embassy is worrying.  (Via ITN)

"There seemed to have been a number of troubling events over the past few years that pushed it to the edge, but Lebanon always managed to pull itself back. Worry there will be one event sectarian strife will be ignited by an attack like this." (Via CNN)

The Iranian ambassador to Lebanon initially told reporters it was clear Israel was behind the attack — something immediately denied by Israeli officials. Abdullah Azzam says it’s working toward the same goals as the Syrian rebels and the attacks will continue in Lebanon until Iranian and Hezbollah forces leave Syria. (Via YouTube / مشاهد من موقع الانفجار )