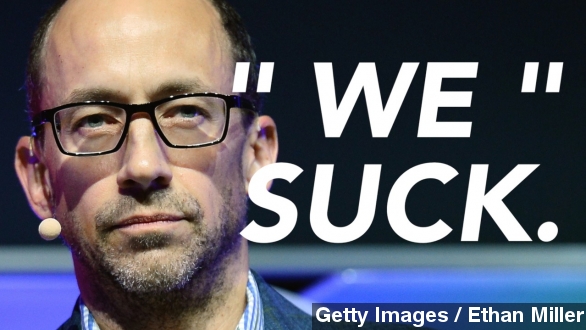 CEO Dick Costolo responded to a post on an internal Twitter forum, saying that the company has shortcomings when dealing with "abuse" and "trolls."

Two words you don't often hear a CEO say about their own company: "We suck."

That's what Twitter CEO Dick Costolo had to say about his company, specifically referring to its seeming inability to deal with bullying and abuse on the site.

In response to a question on an internal Twitter forum, Costolo wrote this, which The Verge obtained: "We suck at dealing with abuse and trolls on the platform and we've sucked at it for years."

He added he was "ashamed" of how the company handled the problem and took "full responsibility."

The question was in reference to a recent article by writer and feminist Lindy West for The Guardian. In it, she discusses her own struggles with Twitter abuse — including attacks from a fake account claiming to be her deceased father — and what Twitter can do to improve the situation:

"I'm aware that Twitter is well within its rights to let its platform be used as a vehicle for sexist and racist harassment. But, as a private company … As a collective of human beings, it could choose to be better."

Clearly, Costolo seems to agree. In a second internal memo he writes the company is going to “fix” the problem, though he’s not clear about exactly how.

The company has made efforts to address the site’s troll culture recently. In December it announced an easier way to report online harassment.

That came after #gamergate debate turned ugly on the site, even leading to death threats and amid several celebrities leaving Twitter, citing online abuse. Costolo himself noted the site had lost what he called "core users" due to the issue.

Outside of retaining users, the site may have another good reason to clean up its act. Twitter is reportedly nearing a deal with Google that would make tweets more searchable and — ugly or not — all the more visible.