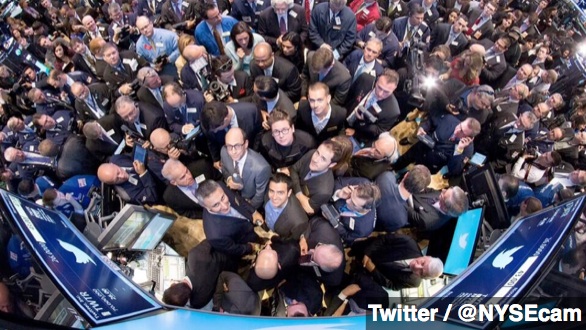 The most anticipated IPO since Facebook hit with a bang. Twitter's stock began trading on the New York Stock Exchange Thursday morning at $45.10 a share.

That's more than 70 percent higher than the $26 share price Twitter set Wednesday before the markets opened. (Via Mashable)

Seventy million common shares at $45.10 a share puts the publicly tradable portion of Twitter at worth more than $3.1 billion.

When it filed its S-1 documents for an IPO with the Securities and Exchange Commission, Twitter listed a market valuation of $18.1 billion. The Web company was already worth more than big names like Sony or The Gap; and the stock's performance means that valuation is now even more impressive.

And as we covered the debut, the price was hovering even higher, at times putting Twitter's per-share price at nearly double its IPO rate. (Via Google)

CNBC reports — on Twitter, of course — within the first eight minutes, more than 30 million shares traded.

Institutional investors bought shares through the big underwriting banks, including Goldman Sachs, J.P. Morgan and Morgan Stanley. But some of the biggest winners were Twitter's leadership team. (Via CNBC)

CEO Dick Costolo's shares are now worth $200 million. Those of board chairman and co-founder Jack Dorsey: $610 million. Co-founder Evan Williams holds a cool $1.5 billion in stock. (Via The New York Times / David Shankbone)

It's not clear how Twitter will perform for the rest of the day, but it's joining some unique company. Six IPOs have doubled their stock prices in 2013 — the last time that happened was back in 2000. (Via CNN)