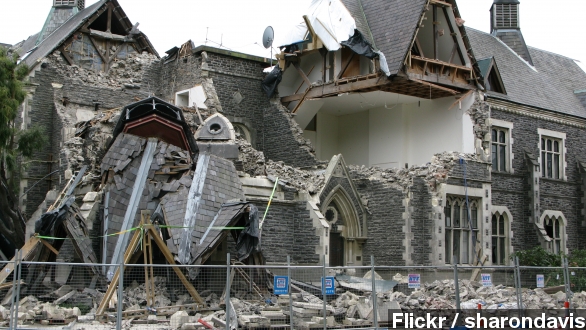 Twitter and Stanford University researchers have found a way to combine tweets with location-based data to measure earthquake impact.

Landslides? Yes. Tornadoes? Uh-huh. Major court cases? You got it.

And even earthquakes. But what if Twitter could do more than just announce earthquakes — what if it could measure them? (Via Twitter)

That's the aim of a new study from Stanford University researchers and the big blue bird itself. The team has found a way to combine tweets with location-based data to measure "ground motion and shaking intensity following significant earthquakes." (Via Twitter)

"We used all geo-tagged Tweets around the world containing the keyword 'earthquake' or 'tsunami' in several languages that occurred in the first 10 minutes following Japanese earthquakes of magnitude 6 or greater from 2011 to 2012." (Via Twitter)

The team hopes the analysis of these tweets can help provide highly-accurate ShakeMaps. According to the U.S. Geological Survey, ShakeMaps are "near-real-time maps of ground motion and shaking intensity following significant earthquakes."

TechCrunch notes it's actually rather common for researchers to tap into social media for tracking diseases and different disasters, but not at this speed. "Those are situations that usually take hours, if not days, to develop." This new form of tracking is in near-real-time, just like USGS ShakeMaps.

And a writer for Engadget says this research could help responders quickly determine the needs of an area hit by a quake. And not only that, "tweet volume could even represent the primary data source in areas where there are few recording stations."

Twitter and Stanford say they plan to share their research in July at the National Conference on Earthquake Engineering.