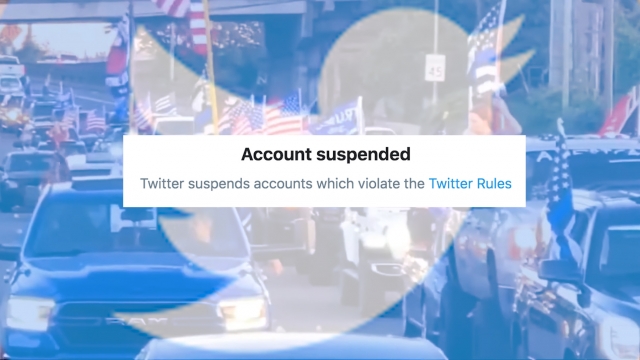 Twitter's action follows a Newsy investigation that revealed ominous statements by MAGA Drag The Insterstate's founder about the post-election period.

Twitter has suspended multiple accounts associated with MAGA Drag the Interstate, a group of self-described "patriots" that organized nationwide rolling rallies leading up to the election.

The group disavows bigotry and violence on its website. A Newsy investigation in October found that the group's co-founder, Keith Lee, had deputized himself as a "digital warrior" for the QAnon conspiracy theory and used the hashtag "qarmy".

Lee also promoted the pre-election rallies with militant language in online forums, including one online show that uses the tagline, "The Battle Has Begun."

"We're to the point now. We're on that precipice," said Lee in an appearance on the show to talk about MAGA Drag the Interstate. "This is our last attempt to unite the country peacefully, because we're tired of it. We are tired of the Marxist stuff that’s embedded in our government, and I agree totally with what Rampage is saying."

Experts in extremism expressed heightened concern about what that could mean during the post-election period, which is now upon us.

"Look, QAnon has been declared by the FBI as contributing to domestic terrorism," said Heidi Beirich, co-founder of the Global Project Against Hate and Extremism. "If we have weeks of contest over different voting places, lawsuits and whatnot, these groups are going to be in the streets. They're going to think that the election is being stolen from them."

Twitter did not say which rule the suspended accounts violated but pointed Newsy to a prior thread initially posted by the social media firm in July.

It said: "We will take strong enforcement action on behavior that has the potential to lead to offline harm. In line with this approach ... we are taking further action on so-called 'QAnon' activity across the service."