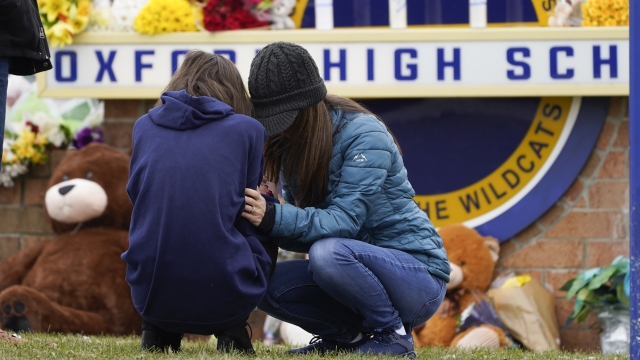 The lawsuits were filed on behalf of a senior who was wounded and her sister who was next to her during the shooting at Oxford High School.

The parents of a 17-year-old girl who was shot in the neck at Oxford High School during a mass shooting that left four students dead filed a pair of lawsuits seeking $100 million each against a Michigan school district, saying Thursday that the violence could have been prevented.

The lawsuits were filed in federal court in Detroit by Jeffrey and Brandi Franz on behalf of their daughters, Riley, a senior who was wounded Nov. 30, and her sister Bella, a 14-year-old ninth grader who was next to her at the time she was shot, attorney Geoffrey Fieger said.

The parents attended a news conference Thursday with Fieger in his Southfield offices. Jeffrey Franz appeared stoic, staring ahead as the personal injury lawyer accused school officials and staff at Oxford High of not doing enough to prevent the shooting and protect students.

Brandi Franz sat, often with head bowed. The parents did not address reporters.

The lawsuits are the first known civil suits filed in connection with the shooting. Named in the suits are the Oxford school district, Superintendent Tim Throne, Oxford High School principal Steven Wolf, the dean of students, two counselors, two teachers and a staff member.

The Associated Press sent an email Thursday seeking comment from the district.

10 students and a teacher were shot at the school in Oxford Township, roughly 30 miles north of Detroit.

The suspect, a 15-year-old sophomore at the school, was arrested at the school and has been charged as an adult with murder, terrorism and other crimes. His parents, James and Jennifer Crumbley, later were charged with involuntary manslaughter and arrested.

Personal-injury lawyers have expressed doubt that the school district could be successfully sued for letting the student stay in school. That's because Michigan law sets a high bar to wring liability out of public schools and other arms of government.

"You have to show that the administration or faculty members were grossly negligent, meaning they had a reckless disregard for whether an injury was likely to take place," said attorney A. Vince Colella.

Fieger acknowledged Thursday that state law makes it difficult to successfully sue public bodies like school districts. He said a federal lawsuit allows him to subpoena the school district for records and evidence connected to the suspect and the shooting.

"I understand that this is not going to be easy," Fieger said. "However, now is the time to do something about it."

The gun used in the shooting was bought days before by James Crumbley and their son had full access to it, prosecutors said.

The morning before the shooting school officials met with the suspect and his parents after the school after a teacher found a drawing of a gun, a bullet and a person who appeared to have been shot, along with messages stating "My life is useless" and "The world is dead."

The Crumbleys "flatly refused" to take their son home, Throne has said.

The Franz family lives in Leonard, just northwest of Oxford. One of the lawsuits criticized school officials for not expelling, disciplining or searching the teenager prior to the shooting which allowed him to return to his classroom "and carry out his murderous rampage."

The lawsuit alleges civil rights violations under the 14th Amendment and also said the school district "knew or should have known that the policies, procedures, training supervision and discipline" staff members named in the suit "were inadequate for the tasks that each defendant was required to perform."

"There's a responsibility that our society shares in protecting our children," Fieger said. "There is a responsibility among teachers, counselors and school administrators who could easily have prevented and stopped this slaughter."

Riley Franz was hospitalized following the shooting. She now is recovering at home, Fieger said.

On Wednesday, a statement posted on the district's website by Throne said that after all the facts have been obtained and released through the course of the prosecution, he will recommend to the Oxford Board of Education that the district initiate a review of its entire system "as other communities have done when facing similar experiences."

"Our goal with all of this is to bring together all of the facts of what happened before, during and after this horrific incident," he wrote. "We are committed to doing this in a way that allows our community to move forward and does not re-traumatize our community members, who are reeling and suffering from this horrible event."

The criminal cases against the suspect and his parents are being overseen by the Oakland County prosecutor's office, and Michigan's attorney general said Tuesday her office will review events that occurred before the mass shooting, despite the district's rejection of her offer to be its third-party investigator.