Two Giant Robots Are Going To Have A (Hopefully) Epic Fight 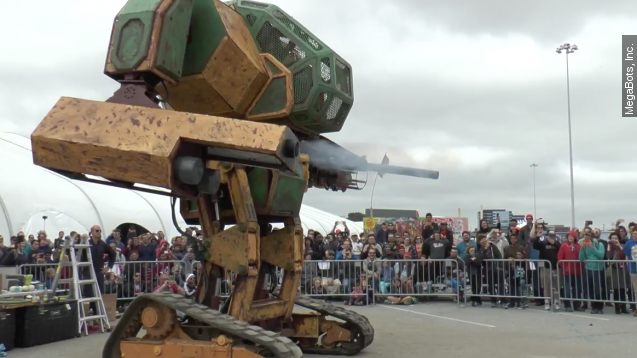 The teams behind two giant robots have challenged each other to a duel.

It's finally happening. The thing you've been hoping for since you first saw "Transformers": a real-life giant robot fight. (Video via Hasbro / "The Transformers")

It all started when the team behind MegaBot, a US-made robot, challenged its Japanese counterpart Kuratas to a duel.

MegaBot is 15 feet tall, weighs eight tons and pretty much looks like a robot-tank hybrid. That's just a paintball gun, though it does fire pellets at 100 miles per hour and smashes through car windshields.

But Kuratas' team isn't sweating it. When they accepted the duel, they even made a dig at Megabot's bulky design and huge gun, calling it "super American."

Kuratas' team wants this to be a straight-up fist fight, which seems strange considering their bot is smaller at 12 feet tall and 4.5 tons. It sports a gatling gun that fires BBs.

As far as a practical use for these things, there really doesn't seem to be one.

One of MegaBot's creators told Engadget, "We're bringing video games and science fiction to life in the form of internally piloted giant fighting robots. ... This is the kind of live entertainment we've all been promised for dozens of years."

So this really does feel like one big publicity stunt for some future robot-fighting sports league. But it still sounds awesome. (Video via Walt Disney Studios / "Real Steel")

Let's just hope these robots are a bit more graceful than the ones at DARPA's last robotics competition.

This video includes music from Brenticus / CC BY 3.0.