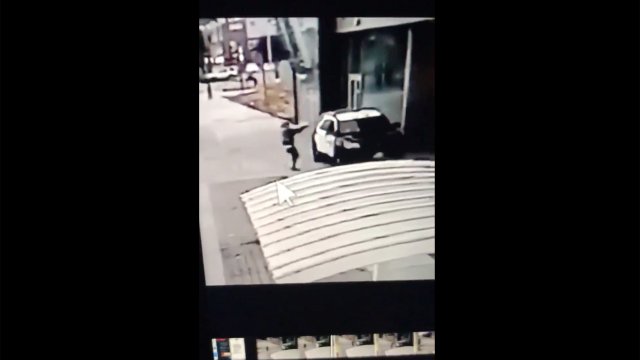 Video shows a man walk up to the passenger side of the car, raise a gun to the window and fire several rounds before running away.

Los Angeles authorities are looking for a man who shot and critically injured two sheriff's deputies sitting in their patrol car.

The Los Angeles County Sheriff's Department tweeted a video that showed a man walk up to the passenger side of the car, raise a gun to the window and fire several rounds before running away. Officials say the incident took place around 7 p.m. Saturday near a Metro station in Compton.

The deputies underwent surgery Saturday after radioing for help and are said to be fighting for their lives. The department says one deputy is a 31-year-old mother and the other is a 24-year-old man. Both were recent graduates and sworn into their duties 14 months ago.

Appearing on CNN's State of the Union program on Sunday, Los Angeles Mayor Eric Garcetti called reports of protesters gathering outside the hospital and shouting "we hope they die" an "abhorrent" act.

"There's no place in a civilized society for anybody to draw an arm and shoot our law enforcement officers who put their lives on the line," Mayor Garcetti said. "And, I won't ever let a couple voices that not only are uncalled for, but it's abhorrent to say something like that when we have two deputies, who are sheriff's deputies, in grave condition."

Meanwhile, President Donald Trump responded to a video of the shooting released by the sheriff's department, tweeting, "Animals that must be hit hard!"

Also outside the hospital, police arrested a reporter who they say violated dispersal orders and interfered with the arrest of one of the protesters. The reporter said she was merely covering the arrest and was clearly identified as a journalist.

The department has come under fire during recent police brutality protests. Authorities are searching for the suspect.