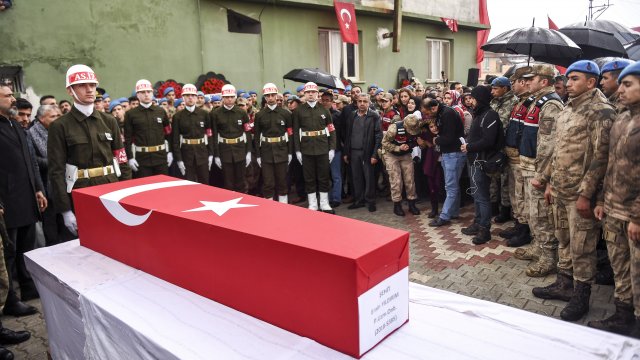 As fighting intensifies in the war-torn region at the Syrian-Turkish border, thousands of refugees flee farther north in hopes of crossing into Europe

Reports out of the Middle East say that two aircraft have been shot down in the Idlib region of Syria as conflicts continue to escalate. Syrian and Turkish state-run media published contradicting views on the issue, making it unclear who exactly is responsible for downing the drones.

This comes just a few days after 33 Turkish soldiers were killed in a Syrian airstrike that targeted rebel-held territories in Idlib.

The United Nations says nearly 500 civilians and children have been killed by combat since December. As the war intensifies, millions of refugees in the region are seeking safety in neighboring nations.

On Friday, Turkish officials indicated that the country would no longer block a migrant route into Europe, causing scores of people to flee farther north. But the influx of migrants resulted in both Greece and Bulgaria shutting down its borders.

The Greek Prime Minister tweeted, “Significant numbers of migrants and refugees have gathered in large groups at the Greek-Turkish land border and have attempted to enter the country illegally. I want to be clear: no illegal entries into Greece will be tolerated. We are increasing our border security."

As thousands of refugees camped out at the European border, Greek border patrol fired tear gas in an attempt to control this humanitarian crisis.

But as more migrants arrive at the border hoping to cross into Europe everyday, it's unclear how the E.U. will handle the influx of those fleeing the war-torn region moving forward.