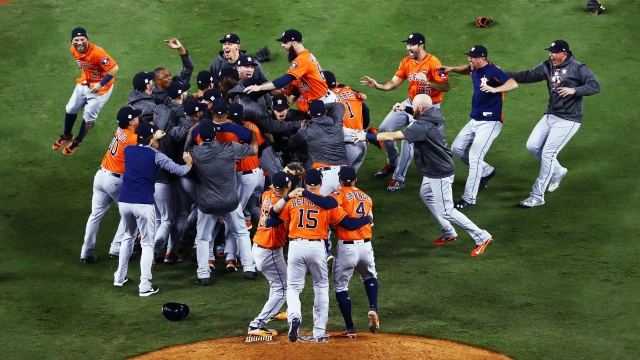 Stealing signs to give batters an advantage is a part of baseball lore. But Houston Astros' use of video spying is shaking integrity of the game.

In 1951, in one of the most iconic moments in baseball history, Bobby Thomson hit this home run to defeat the Brooklyn Dodgers and send the New York Giants to the World Series. Sixty-eight years later, a question lingers: Were the Giants cheating?"

That question is relevant again after managers of baseball's 2017 and 2018 World Series champions were both forced out of their jobs in a cheating scandal that's rocking the game.

In 1951, the New York Giants staged a late-season comeback to tie the Brooklyn Dodgers in the standings and force a playoff while allegedly using a telescope to steal pitching signs. Batters were allegedly alerted on what pitch was coming — say a fastball or a curveball — by an electronic buzzer that sounded in the dugout.

Years later, the Houston Astros defeated the Los Angeles Dodgers in the World Series after allegedly using a center field camera during the 2017 season to detect pitch selections the opposing catcher signaled to pitchers.

This week, after a Major League Baseball investigation resulted in their suspensions, the Astros fired manager AJ Hinch and general manager Jeff Luhnow. Now their former bench coach, Alex Cora, the alleged mastermind of the 2017 scheme, has been forced out as manager of the Boston Red Sox, whom he guided to the 2018 World Series title. That season may be tainted as well.

And the fallout widened Thursday as former Houston outfielder Carlos Beltran abruptly resigned from his new job as manager of the New York Mets over his alleged role in the Astros' sign stealing.

Batters in professional baseball get a distinct advantage if they know what pitch is coming, and visually detecting signs in the field of play has been a hotly contested part of the game. But using technology, from the Giants' telescope in 1951 to the Astros' live camera and dugout video monitor in 2017, is something altogether different.

In this nine-page report, MLB Commissioner Rob Manfred concluded that the Astros' sign-stealing scheme is something that he regards with "utmost seriousness" as a threat to the integrity of the game. He says it merits "significant discipline."

The Astros' additional punishment includes a $5 million fine and losing the rights to select players in the first and second rounds of the next two major league drafts. An investigation continues into whether Cora and the Red Sox cheated in 2018, prompting Boston Globe sportswriter Alex Speier to write: "What a mess. What a devastating mess."