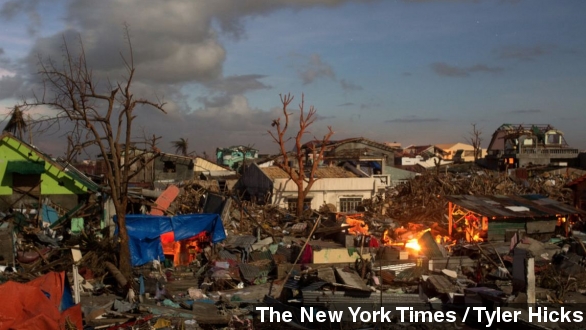 As the Philippines continues to recover form the devastation of Typhoon Haiyan, the first of the dead are being buried in mass graves.

The Philippines has only started to pick up the pieces after a devastating typhoon ripped through the island chain last week. Survivors are now collecting the bodies of victims to bury in mass graves.

So far the U.N. says more than 4,500 people are confirmed dead in the wake of Typhoon Haiyan's destruction. The storm's 195 mile per hour winds left thousands trapped under leveled buildings and homes. (Via ITN)

But as survivors and aid workers continue their rescue efforts, city officials are complaining about the putrid smell of the thousands of corpses lining the streets.  (Via NBC)

Now community members loading the dead into trucks to take them to mass burial sites in order to avoid spreading disease. (Via The New York Times)

Officials say they expect the death toll to rise substantially. They estimate thousands more victims are trapped under mountains of debris. (Via ABC)

The U.N. says almost 12 million people were effected by the typhoon. Eighty percent of the affected are still waiting for help fully one week after the typhoon made landfall. (Via CNN)

Survivors are criticizing the government over its inability to get supplies out fast enough. U.S. Navy helicopters are dropping off supplies to various communities.  (Via CBS)

As residents collect their dead, many can only take pictures of the victims as there is little time to identify them. Weather experts say Typhoon Haiyan is possibly one of the strongest storms ever recorded.