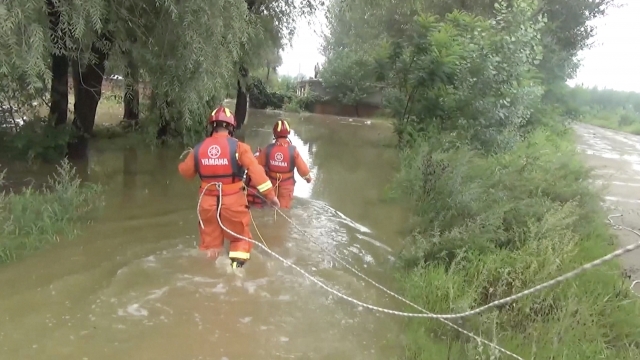 At least 44 people have died and 16 are still missing.

The death toll from Typhoon Lekima in eastern China continues to rise days after the region was battered by the massive storm.

The number of deaths attributed to the storm varied slightly across media outlets Monday. Reuters cited official data that put the death toll at 44, while Chinese state media said 45 people had died. But both reports said 16 people were still missing.

As Newsy previously reported, Lekima made landfall on Saturday in Zhejiang province. It's an area that's often hit with typhoons, but this is one of the strongest storms in the province's history.

The storm brought wind speeds of up to 116 mph. It was initially labeled a "super typhoon" but it lost that designation when it weakened before landfall. Close to 5 million people were affected by the floods and more than 1 million were evacuated from their homes. About a quarter of the evacuations were in Shanghai, China's biggest city.

Many of the deaths were related to a landslide that contributed to severe flooding. According to the Associated Press, rescue efforts were still underway as of Monday.