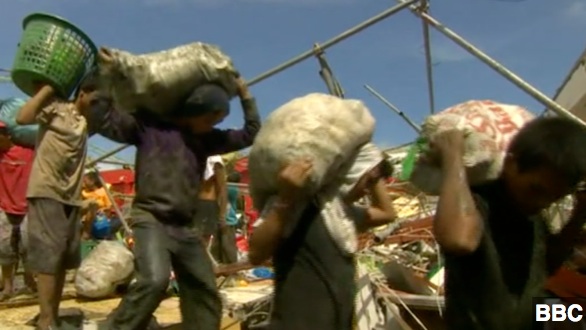 Survivors in the Philippines are desperate for aid after Typhoon Haiyan. The U.S. has boots on the ground but more help is still needed.

Vietnam is on alert after what's left of super-typhoon Haiyan made landfall Sunday.

The storm is not nearly as violent as it was a few days ago when heavy rain and winds of nearly 200 mph flatened almost everything in its path. Meanwhile survivors in the Phillipines are desparate for aid.

"The most damaged city on earth today offers no shelter, no water and no power. What little food there is must be scavanged and looted."

"Right now all we can do is survive the day but I don't know what will happen tomorrow."

In Tacloban, on​e of the hardest hit cities, hundreds of people are waiting at the airport for aid. ​​

"Now we are so very hungry and thirsty."

- Some 2 million people are believed to be affected.

- 23,000 houses have been either destroyed or damaged.

- Officials think as many as 10,000 people might have lost their lives.

The storm has left the island nation with virtually no medical care. Makeshift hospitals have been set up, but it's not nearly enough.

"Many of the patients being treated without anesthetics. This woman has just given birth, a baby girl, Bea Joy."

Help is on the way but it can only come so fast.

"C130 planes are dropping off food water and other supplies. ... But the U.N. says many roads and bridges were destroyed in the Typhoon making aid efforts more difficult."​​

But observers fear survivors will become more violent as resources continue to dwindle.

A high-school teacher in Tacloban told the AFP — people are losing their minds — and he fears in one week people will be killing from hunger.