U.K. And Ireland 'See A Pathway' To A Possible Brexit Deal 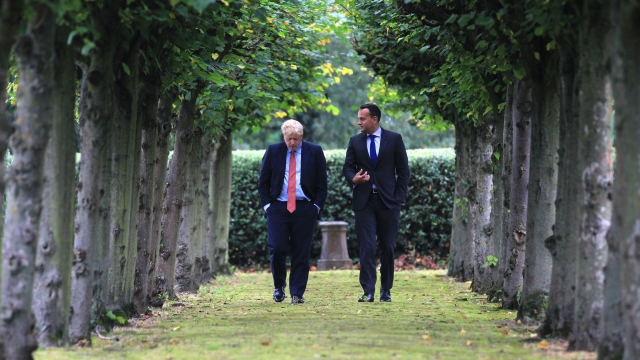 Time is running out for the United Kingdom to reach a Brexit deal.

Time is running out for the United Kingdom to leave the European Union with a deal.But on Thursday, British Prime Minister Boris Johnson and his Irish counterpart Leo Varadkar said they can "see a pathway to a possible deal."

According to a joint statement, they had "a detailed and constructive discussion" and "both continue to believe that a deal is in everybody's interest." That's significant because they've been at odds over issues like whether there will be customs checkpoints between Ireland and Northern Ireland. Still, their statement didn't provide details about the progress the two leaders have made.

Johnson has said the U.K. will leave the E.U. on Oct. 31 with or without a deal. However, Britain's Parliament doesn't want to leave without one. Parliament passed a law last month that requires the government to ask the E.U. for a Brexit delay if a deal has not been reached by Oct. 19. Despite Johnson's pledge to leave at the end of the month, Johnson has said he will follow the law.

The government will reportedly hold a rare sitting of Parliament no matter what happens on Oct. 19, which falls on a Saturday, to talk about what's next.