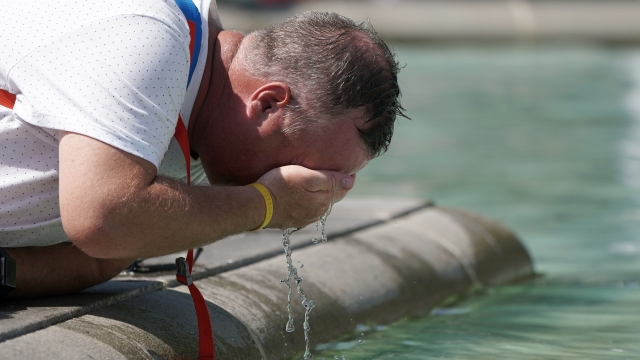 The U.K. Met Office registered a provisional reading of 104.4 degrees Fahrenheit at Heathrow Airport, breaking the 101.7 F Britain recorded in 2019.

Britain shattered its record for highest temperature ever registered Tuesday amid a heat wave that has seared swaths of Europe — and the national weather forecaster predicted it would get hotter still in a country ill prepared for such extremes.

Fire season has hit parts of Europe earlier than usual this year after an unusually dry, hot spring that authorities attribute to climate change.

The typically temperate nation was just the latest to be walloped by unusually hot, dry weather that has triggered wildfires from Portugal to the Balkans and led to hundreds of heat-related deaths. Images of flames racing toward a French beach and Britons sweltering — even at the seaside — have driven home concerns about climate change.

The U.K. Met Office registered a provisional reading of 104.4 degrees Fahrenheit at Heathrow Airport in early afternoon — breaking the record set just an hour earlier and with hours of intense sunshine still to go. Before Tuesday, the highest temperature recorded in Britain was 101.7 F, set in 2019.

The sweltering weather has disrupted travel, health care and schools in a country not prepared for such extremes. Many homes, small businesses and even public buildings, including hospitals, don’t even have air conditioning, a reflection of how unusual such heat is in the country better known for rain and mild temperatures.

The intense heat since Monday has damaged the runway at London’s Luton airport, forcing it to shut for several hours, and warped a main road in eastern England, leaving it looking like a “skatepark,” police said. Major train stations were shut or near-empty on Tuesday, as trains were canceled or ran at low speeds out of concern rails could buckle.

The excessive heat alert covers a large chunk of England and is set to last through Tuesday, when temperatures may reach 104 degrees Fahrenheit.

A huge chunk of England, from London in the south to Manchester and Leeds in the north, remained under the country’s first “red” warning for extreme heat Tuesday, meaning there is danger of death even for healthy people.

Such dangers could be seen in Britain and around Europe. At least six people were reported to have drowned across the U.K. in rivers, lakes and reservoirs while trying to cool off. Meanwhile, nearly 750 heat-related deaths have been reported in Spain and neighboring Portugal in the heat wave there.

Climate experts warn that global warming has increased the frequency of extreme weather events, with studies showing that the likelihood of temperatures in the U.K. reaching 104 F is now 10 times higher than in the pre-industrial era.