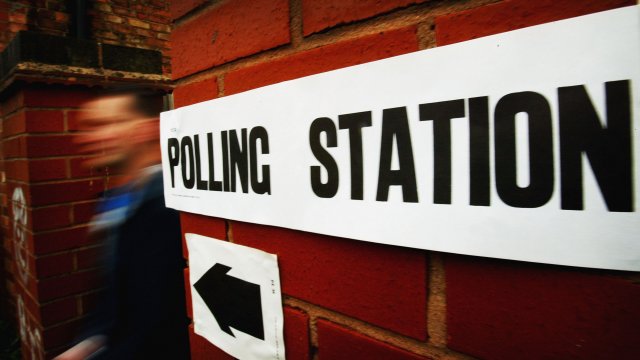 This is the U.K.'s third general election in less than five years. But this one's a pretty huge deal.

On Thursday, voters in the U.K. will head to the polls for another general election.

This is the country's third in less than five years. But this one's a pretty huge deal, considering it could shape the U.K.'s future and how its divorce from the European Union will play out.

Voting centers will open their doors at 7 a.m. local time and close at 10 p.m. British citizens or citizens of the Commonwealth of Ireland who are over the age of 18 and live in Britain can participate, as long as they registered to vote by the Nov. 26 deadline.

Voters will choose a candidate to represent their local district in Parliament's House of Commons, which decides the U.K.'s laws and policies. A total of 650 of these lawmakers will be elected, one for each district.

Britain's biggest political parties are the Conservative and Labour parties. But multiple other parties have candidates in the race — including the Liberal Democrats party, the Green Party and the Brexit Party. If one of those parties ends up with more than half of the parliamentary seats, that party will usually form the government and its leader will become the prime minister.

According to recent polls, current Prime Minister Boris Johnson's Conservative party appears to be headed for victory over Jeremy Corbyn and the Labour party. The so-called Tories need another 28 seats in the House of Commons to secure a majority, and many analysts are predicting they'll get them.

But after years of post-Brexit turmoil, an unexpected result wouldn't be shocking. After all, the 2016 Brexit referendum and the 2017 general election both turned out to be surprises. The results of this year's election should be in by Friday morning.