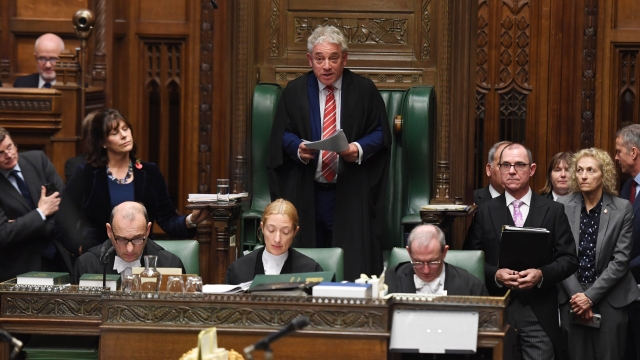 Bercow's time in office was largely defined by Brexit.

There it is. The final time U.K. Speaker of the House of Commons John Bercow yelled "Order."

He stepped down from his role Thursday. He announced his decision to members of Parliament in September, saying he'd promised his family after being elected as speaker in 2017 that it would be his last term. Bercow served as speaker since 2009.

At his election then, he told Parliament, "My commitment to this house is to be completely impartial as between members of one political party and another, that is what it's about."

He went on to be known for his distinctive call to order — according to a BBC analysis, he said it nearly 14,000 times over the past decade.

That same analysis found that Bercow's time in office was largely defined by Brexit, despite the fact that the referendum didn't happen until more than halfway through his time as speaker. The speaker is responsible for enforcing the rules of Parliament, and Bercow divisively used that responsibility to, according to the New York Times, stretch unwritten rules to prevent a no-deal Brexit.

On Monday, members of Parliament will vote via secret ballot on who will take Bercow's place. To be in the running, candidates must be nominated by at least 12 members, with at least three of them being from a political party different from that of the candidate. Candidates would then need to secure at least 50% of the votes to become speaker. But if no candidate manages to do so, then the candidate with the fewest votes, as well as those with less than 5%, are eliminated. MPs would then vote again on the reduced slate of candidates and keep doing so until one candidate receives more than half the votes.

Nine candidates have thrown their hats in the ring to be the next speaker, including deputy Speaker Lindsay Hoyle and Labour Party politician Chris Bryant.