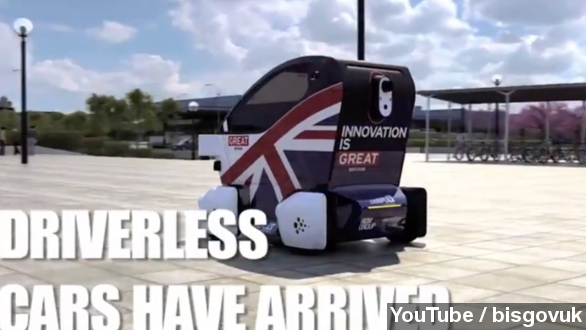 The U.K. has started limited testing of driverless vehicles, starting with a diminutive people-mover.

Hands-free cars are cleared to start testing in the U.K. after a government investigation found there were no legal speed bumps in the way.

And the funding is all set: The Telegraph reports "Chancellor George Osborne committed £20m in funding to quest for driverless cars in the 2014 Budget."

The first vehicle to get the test-drive honors is the LUTZ Pathfinder, a product of the Transport Systems Catapult, a government incubator focused on transit technology.

It should be practically impossible to mistake for anything else. It's basically a golf cart, but what a golf cart it is. (Video via YouTuve / bisgovuk)

The Pathfinder is coated with sensors: radar, lidar, touch-sensitive bumpers and wide-field cameras. It uses them together to build as complete a picture of its environment as possible. It will carry two passengers 40 miles at up to 15 miles per hour.

"And inside, while there is a steering wheel at the moment — they couldn't resist putting a racing steering wheel on it — but all of this will be gone. The pedals will be gone eventually, and you'll just be left with these screens," said the BBC's Richard Westcott.

It bears some similarities to Google's latest driverless car: simple, tiny and missing all the traditional inputs of a driver's seat.

Of course, Google and other companies are working on driverless cars that actually look like cars, too. But in the U.S. — as in the U.K. — legislation has yet to catch all the way up to advances in driverless tech. (Video via Mercedes-Benz)

The U.K.'s driverless plan will require revisions to highway code and new laws to determine who's at fault in the event of a collision.

The BBC reports the U.K. government has indicated it will make "a full review of current legislation" by 2017.

This video includes music from Podington Bear / CC BY NC 3.0.