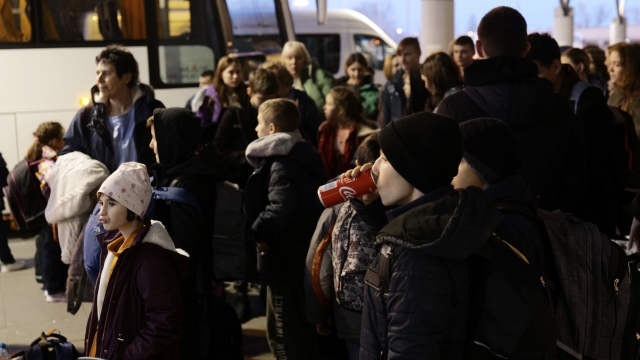 The U.K. government program Homes for Ukraine is helping those fleeing the war, but some hosts are using it to hold women against their will.

Svitlana Opanasenko volunteers at the Ukrainian Cultural Center and supports people who have had problems with their hosts.

This week, she took a call from a woman who had been held against her will by a man she met on Facebook.

"She got in touch with that person while she was in Poland," Opanasenko said. "When she got here [to the U.K.] she ended up being locked in his house, and he just wouldn't let her out, So probably he had different expectations about what that relationship would be."

Other volunteers at the center say they have been inundated with similar calls.

"Women come to us complaining about the same thing, when they come and they live with the sponsor, certain things are expected of them," Opanasenko said.

In March, the British government announced the Homes for Ukraine program, which allows anyone to host a family or individual who has been successfully granted a U.K. visa through a program which allows Ukrainian nationals to come to the U.K. if they have a named sponsor.

But a new report produced by University College London says the sponsorship program could create and heighten risks of human trafficking and exploitation.

"To some extent, some level of exploitation is inevitable in some cases," said Ella Cockbain, author of the University College London report. "Not without major steps to improve the current systems, there’s just going to be an unnecessarily high level, and really none of it is acceptable. Taking those steps to mitigate the risks is just so important."

In EU countries, accommodations for refugees is organized primarily by national authorities, not individuals. Ukrainian refugees also do not require visas.

In the U.K. — under the Homes For Ukraine program — sponsors are a necessity.

The vast majority of them are volunteering their homes for the right reasons, and they receive £350 (about $430) per month from the government. But there have been reports that in some areas, as many of 30% of registered would-be sponsors are single men over 40 years old.

But the government says safeguards are in place.

These include "home office security and background checks on all sponsors, before visas are issued" and at least one council visit to a sponsor's property.

"To what extent can we expect Ukrainian refugees to rely on the benevolence of sponsors?" asked Olivia Vicol, director of the Work Rights Center. "Some of whom we already know are running out of patience or abusing them. I think these questions need to be answered as soon as possible."

It is a visa-based system, which requires refugees to take a leap of faith that the U.K. government is making sure the homes they’re moving into are safe.