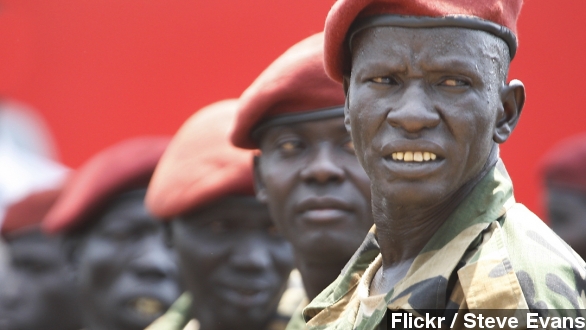 Following a reported coup attempt Monday, spreading violence in the country has caused foreign countries to evacuate their citizens.

The world's newest country might be headed toward civil war. South Sudan has seen fighting this week that killed 500, and now the U.N. reports one of its bases in the country was attacked.

"On Monday, the president, Salva ​Kiir, blamed the clashes in Juba on the former Vice President Riek Machar, who he said was behind a coup attempt — something Mr. Machar has denied." (Via BBC)

"Clashes between rival South Sudan army factions have left up to 500 dead and around 800 injured." (Via Euronews)

Mr. Machar claims he isn't involved in the fighting and blames it on President Kiir, who he says is stoking ethnic tensions in the country. (Via YouTube / WorldLeadersTV)

Who's really driving the rebel factions isn't clear, but with the government already starting to lose control of key cities, the international community is preparing for the worst.

The U.S. Embassy in the capital, Juba, has been ordered closed. Neighboring Uganda and Kenya have also evacuated their citizens, sending a fleet of buses to transport them out of the country. (Via Sudan Tribune)

The British government even sent a military transport plane to pick up any British nationals in the country. (Via The Telegraph)

The U.N. is still investigating the attack on its base, but a spokesperson says civilians who had taken refuge there were the likely targets, and there were casualties. (Via United Nations)

The U.N. and U.S. have urged both sides to cease hostilities, but analysts worry what seems to be a political battle could break down along ethnic lines and lead to civil war, if the fighting continues.