U.N. Calls On Police To Limit Use-Of-Force Tactics At Protests 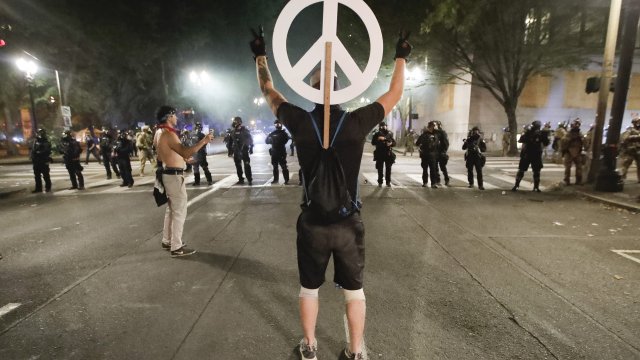 As thousands continue to protest over racial injustice across the U.S., the United Nations is weighing in on how authorities are handling the situation.

The U.N.'s human rights office called on law enforcement and governments to limit use of force tactics on protesters, saying it is their obligation to facilitate peaceful demonstrations.

The office said states are required to allow peaceful protests and can't obstruct them "without compelling justification." It also said authorities should minimize use of force when deescalating potentially violent situations.

It also laid out international standards on government response to protests, which speaks to the ongoing clashes in Portland, Oregon.

Protests have agitated the city for months since the death of George Floyd. In response, President Donald Trump deployed federal authorities to Portland, despite opposition from city officials.

In testimony before the House Judiciary Committee this week, Attorney General William Barr backed the president's decision, which he said was meant to stop rioters from destroying federal property.

"In the wake of George Floyd's death, violent rioters and anarchists have hijacked legitimate protests to wreak senseless havoc and destruction on innocent victims. The current situation in Portland is a telling example. Every night for the past two months, a mob of hundreds of rioters have laid siege to the federal courthouse and other nearby federal property. The rioters have come equipped for fight."

On Wednesday, Oregon Gov. Kate Brown said the federal government has agreed to start withdrawing it agents from Portland as long as the state increases security around the federal courthouse.