The U.N. Wants To Expand One Of Our Best Carbon Storage Tools 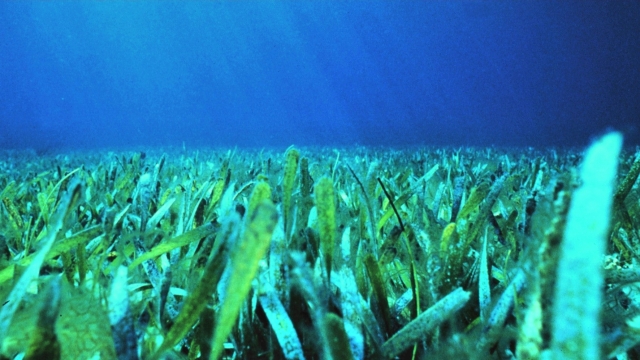 The U.N. is focusing its climate stakeholders on expanding marine protected areas, which can effectively keep carbon out of the atmosphere.

The oceans have already absorbed a lot of carbon dioxide from human activity. And the U.N. says expanding the protected areas of the oceans will help make sure that carbon stays out of the air.

The Intergovernmental Panel on Climate Change estimates that in the last two centuries, the oceans have absorbed a little less than 40% of the carbon from human-caused emissions. Coastal wetlands in particular sequester roughly half of the carbon found in marine sediments.

But it's tough to know just how much of that carbon resides in marine protected areas, or MPAs. There are multiple tiers of protective standards, and only about 2% of the global ocean is fully protected from fishing and other extraction.

Regardless, scientists are confident that those MPAs are serving an important climate role. Douglas McCauley is the director of the Benioff Ocean Initiative at UC Santa Barbara. He told Newsy how keeping MPAs pristine helps make sure that big store of carbon stays put.

"Human disturbance, in a big way, whether that's hunting or pollution, or other forms of disturbance in marine systems, in many places degrades the potential of these systems to sequester carbon," said McCauley.

Protecting ocean areas also takes pressure off the animals and plants that live there. Keeping predators and prey in their natural abundance keeps the rest of the ecosystem healthy, which is a good way to lock up new carbon.

"Having the predators keeps the herbivores at low abundance, or at a naturally low abundance, which prevents them from overeating the plants," McCauley said. "Those primary producers, as scientists call them, those algae or marine plants are the real entry point by which carbon comes into an ecosystem."

The U.N. has plans for MPAs that would advance both of these goals: keeping already stored carbon safe and making it easier to store new carbon. Moving forward, it wants its stakeholders to turn more marine and coastal ecosystems into officially protected areas, and wants to see more coastal habitat restored to a more natural, carbon-friendly state.

What Will It Take To Protect More Of The Oceans From Climate Change?

Results will likely require more support and investment, whether that's through globe-spanning U.N. actions or from local governments who want to look out for their own coastlines. And McCauley says scientists will want to get a better handle on just how much carbon MPAs can secure.

"We in the science and policy community are just beginning to realize that lo and behold, these same really valuable safeguards for biodiversity and safeguards for food, and producers for biodiversity and producers for food, are also storing carbon," McCauley said. "I think we need to do a better job of actually including some of the accounting, in terms of volume, and then potentially the economic accounting, for the value of marine protected areas, in terms of serving as safe deposit boxes for carbon."