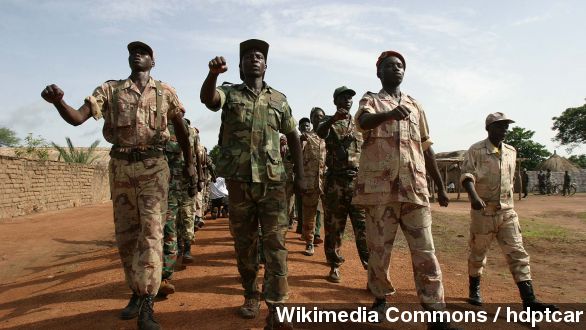 At least 100 people were killed in ongoing violence in the Central African Republic, and the U.N. has passed a resolution to intervene in the country.

At least 100 people were killed Thursday after fighting broke out in the capital city of the Central African Republic. Now, international forces are moving in to stabilize a country spiraling out of control.

The country's capital, Bangui, was assaulted in several key areas by militias reportedly striking back against the predominantly Muslim rebel coalition Seleka, which seized power from the government earlier this year. (Via BBC)

Since coming to power, Seleka has been blamed for the widespread violence and looting in the CAR. Many of the militia groups currently fighting Seleka are Christian-based, and observers say the violence risks becoming a sectarian conflict. (Via Al Jazeera)

Thursday's outbreak of violence comes just as the United Nations Security Council passed a resolution to strengthen U.N. peacekeeping efforts in the region.

The resolution swells the African Union presence in the country by 2,000 troops, and France has vowed to send a further 1,200 soldiers. The U.N. also imposed an arms embargo on the CAR and left open the possibility of future troop deployments. (Via The New York Times)

The U.N.'s Deputy Secretary-General Jan Eliasson told CNN he hopes an early intervention will prevent the CAR from becoming the next major humanitarian crisis area.

"Secretary-General and I are rather, I would say, disappointed that we so often use the term 'never again.' ... It's about time that we act on serious human rights violations early on." (Via CNN)

But a reporter for Channel 4 says the troop surge won't do much to stabilize the large, sparsely populated bush regions of the CAR.

The U.N.'s resolution falls short of the 6,000-9,000 soldiers recommended by the secretary-general, but it does leave open the option for further intervention if the CAR does not stabilize.