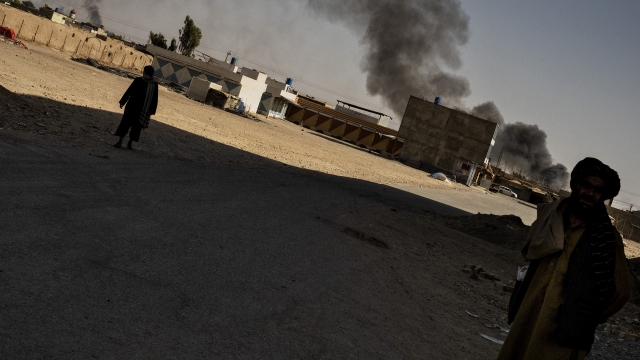 Insurgents have overrun key cities and taken control of two-thirds of Afghanistan.

The United Nations chief is urging the Taliban to immediately halt their offensive in Afghanistan and negotiate "in good faith" to avert a prolonged civil war.

Secretary-General Antonio Guterres said in his first appeal directly to the Islamic militant group, which now controls two-thirds of the country, that he is "deeply disturbed by early indications that the Taliban are imposing severe restrictions in the areas under their control, particularly targeting women and journalists."

"Afghanistan is spinning out of control," he said. "It is particularly horrifying and heartbreaking to see reports of the hard-won rights of Afghan girls and women being ripped away from them."

He expressed hopes that discussions in Doha, Qatar between the Afghan government and the Taliban, supported by the region and international community, "will restore the pathway to a negotiated settlement to the conflict."

Just weeks before the U.S. military completes its withdrawal from Afghanistan after two decades, the Taliban now hold half of Afghanistan’s 34 provincial capitals.

Guterres cited the "tremendous harm" from fighting between the insurgents and Afghan security forces in urban environments.

"At least 241,000 people have been forced to flee their homes," he said. "Humanitarian needs are growing by the hour. Hospitals are overflowing. Food and medical supplies are dwindling. Roads, bridges, schools, clinics and other critical infrastructure are being destroyed."

Guterres called on all parties to do more to protect civilians, warning that continued urban conflict "will mean continued carnage -- with civilians paying the highest price."

"The message from the international community to those on the warpath must be clear: seizing power through military force is a losing proposition," he said.